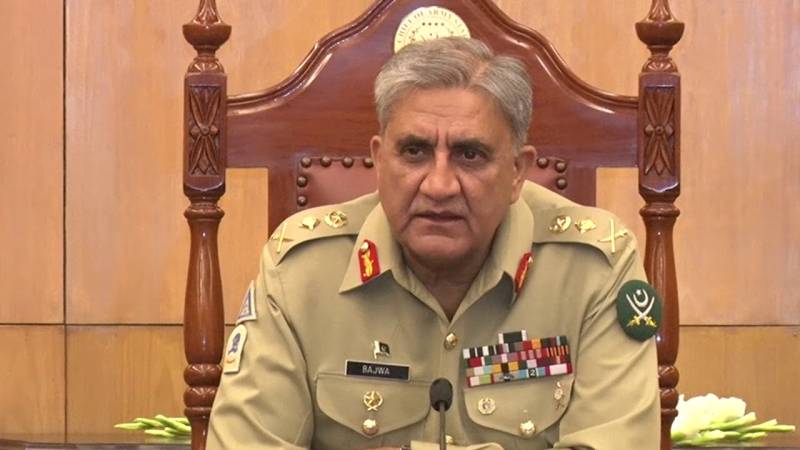 RAWALPINDI – Chief of Army Staff General Qamar Javed Bajwan has stressed upon a need to enhancing combat readiness levels in the wake of evolving strategic and regional milieu, according to ISPR.

While chairing the Corps Commanders Conference, COAS reiterated that fifth Generation Warfare and Hybrid application by anti-Pakistan elements against country’s vital interests must be safeguarded in synchronization with government policies.

The army chief lauded formations’ operational readiness and sustained efforts during Internal Security (IS) employment in aid of civil power particularly the efforts during Muharram and flood relief duties.

COAS appreciated high state of morale in the army and directed commanders to ensure welfare of troops during prolonged / extensive operational and IS deployments.

During the meeting, the top military brass was briefed on evolving regional environment and operational developments especially situation along the Line of Control (LOC), Pakistan’s positive role and contributions in Afghanistan Peace Process, situation along Western Border including fencing progress and Operation Radd-ul-Fasaad.

Forum expressed satisfaction over positive developments / indicators in all domains and improved security situation across the country.

Increased CFVs along LOC targeting civil population by Indian military and blatant HRVs in IIOJ&K were noted as major cause of concern for regional peace and stability.

The forum extensively deliberated upon prevalent situation inside IIOJ&K and evolving situation in Afghanistan with impact on Pakistan’s security dynamics.

The Indian troops committed 2,192 CFVs during the running year while 11 Indian spy quadcopters were shot down during the said period over intrusion on Pakistan’s side.

In IIOJ&K, Indian atrocities, which intensified since Delhi revoked the special status of the territory, are being continuously highlighted by Pakistan at different forums.

As many as 192 Kashmiris were killed while 44 women were raped/ molested from January to August of this year.

Pakistan has completed 1700 kilometers fencing out of total 2611Kms of border with Afghanistan while fencing along the Pak-Iran border is in the progress.

Pakistan Army has completed over 400 border forts out of planned more than 1000.