Another tragic news from Kasur: Justice for Zainab 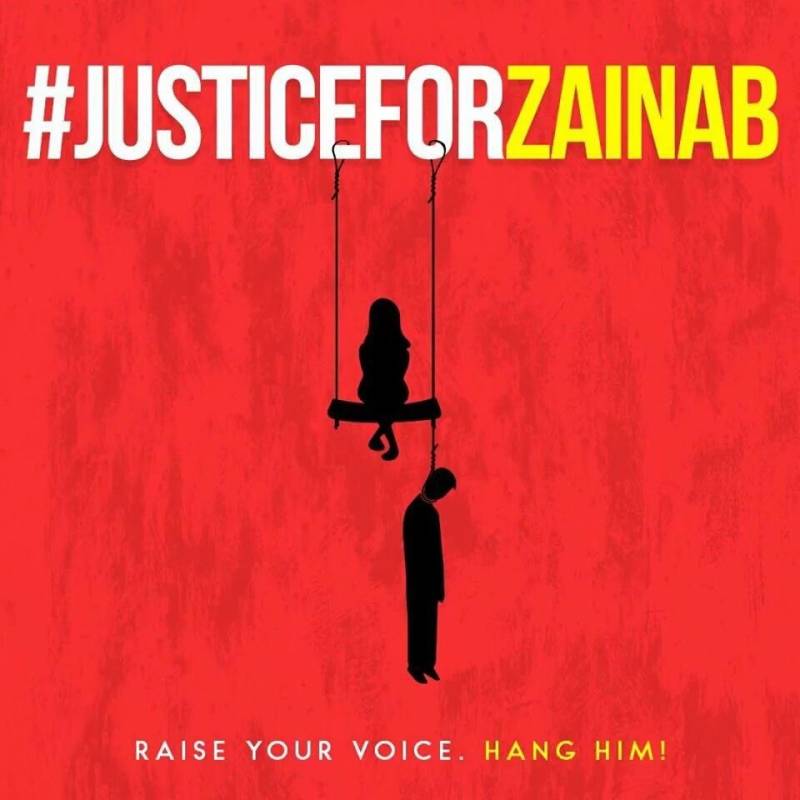 Social media is flooded with yet another devastating news from Kasur.

People are taking to Twitter to express their rage towards this heartbreaking incident which took place in Kasur. An eight year old girl Zainab was raped and then brutually murdered by a monster who not for once thought about the little girl who isn’t even aware of the word “bad touch”.  Zainab was kidnapped , raped multiple times before she was strangled to death. Her body was dumped in a heap which was found on Tuesday. Every single second of her pain is a wake up call for us to realise that girls in our society are not protected. It is for us to realise where we as a nation are going wrong.

It is too late to condemn the situation as we lost Zainab however this is the right time to learn from our mistakes! People are taking over social media to acknowledge the ‘white Elephant in the room’.

Celebrities, politicians and all the other opinion leaders are coming together to speak up against such horrible act which left the family in a lifelong trauma.

Find him!!! Do what it takes to find him and make an example out of him for Gods sake !! An example which scares anyone to even think about doing something like this again. @pid_gov @GovtOfPunjab #JusticeForZainab https://t.co/t0GTUo9AjT

A vigil for Zainab and a plea for safe society:

Regardless of the gender we need to condemn and end sexual abuse:

Out of the sexual abuse victims, 41 per cent were boys. As many as 2,410 girls and 1,729 boys were sexually abused last year.#JusticeForZainab

If you can't find the rapist and hang him publicly then sorry forget law even the humanity has died. We're failed as a nation. #JusticeForZainab

Justice for every child:

Not the government but the people:

A 7 year old child was raped and brutally murdered. I pray for Zainab’s family and hope the rapist gets the worst of the worst punishment imaginable. Not by the government, but by the people. #JusticeForZainab pic.twitter.com/HiwUKpohwh

Setting an example is where we start from:

A similar incident occured in Iran last year where a 7 year old,Atena Aslani was assaulted,killed and dumped to which the Irani government openly hanged the assaulter infront of a large crowed.We demand the same from our supreme court #JusticeForZainab pic.twitter.com/ERal8iAy1w

#JusticeForZainab There have been 11 Zainabs in Kasur last year, we forgot about them after a brief outrage! Now, will we force Police, Govts & Courts to act on the 12th Zainab or forget about this too after a few days & wait for a 13th Zainab to make us angry again?

She is a responsibility not an opportunity:

As per Islamic principles, we should publicly punish those involved in heinous crime and convicted by court of law. There can be no better deterrence than this. #JusticeForZainab

Children are Allah’s greatest gift. They stand for everything good in humanity, Zainab’s tragedy is humanity’s tragedy. Deeply saddened by it, can’t even imagine what her family is going through. We must speak up, justice has to prevail. #JusticeforZainab

The list can go on but we are sorry and ashamed Zainab that we couldn’t save You or the ones before you but not letting go this time around. We want justice for Zainab and all the other children, women or even men! This is the time to stand up against this monstrosity!