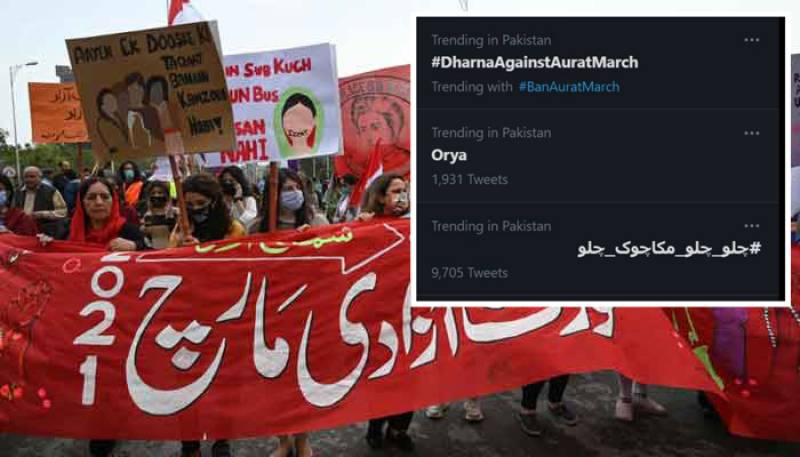 ISLAMABAD – A doctored video clip from Aurat March 2021, in which a large number of women can be seen chanting slogans in a unified formation, synchronized with the beat of drum mentioning Almighty, Prophet PBUH, and other religious personalities, has taken Pakistan by storm.

Continuing with its theme of fighting against the patriarchy, they can also be heard chanting, ‘Tera Baap bhee daiga Azadi, Hum Lai kar rahain gay Azadi’.

Social activist and lawyer Jibran Nasir posted a video with a caption stating ‘the original video from Aurat March with correct subtitles exposing the malicious and nefarious propaganda against the March organisers.

The original video from #AuratMarch with correct subtitles exposing the malicious and nefarious propaganda against the March organisers. pic.twitter.com/SVqTpZ8BwZ

Replying to the tweet of a social media user, who posted the edited version of the clip, Jibran wrote falsely accusing someone of blasphemy is committing blasphemy yourself. You've no excuse now. Please delete and clarify, he added.

Meanwhile, the internet remains divided over the issue with many calling for a complete ban on the Aurat March over 'controversial' banners and placards that apparently target religious figures – which is certainly not true.

This year, the rallies under Aurat March were organised in major cities of Pakistan, including Karachi, Lahore and Multan on the occasion of International Women’s Day with a focus on the crisis of care amid the coronavirus pandemic.

Uniting the woman of Pakistan under the umbrella of Aurat March, protesters gather around and demand to curb the ...