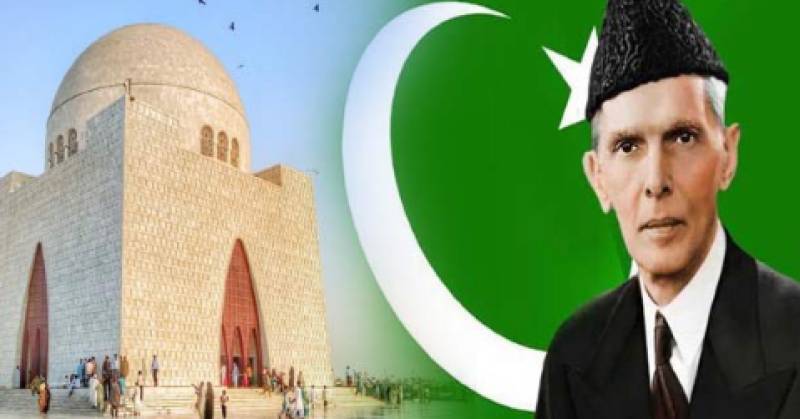 KARACHI - The 71st death anniversary of the father of nation Quaid-e-Azam Muhammad Ali Jinnah is being observed on Wednesday (today).

Muhammad Ali Jinnah was born on 25th December 1876. He was a lawyer, a legendary politician and the founder of Pakistan. Jinnah served as leader of the All-India Muslim League from 1913 until Pakistan's creation on 14th August 1947 and then as Pakistan's first Governor-General until his death.

Jinnah is revered in Pakistan as Quaid-i-Azam and Baba-i-Qaum. In this connection, a special ceremony of Quran Khawani and Fateha is going to be held at the mausoleum of Quaid-e-Azam in Karachi today.

People from different walks of life will visit the mausoleum to lay a floral wreath on the grave. Several politicians, leaders, celebrities and Twiterrati have paid tribute to the great leader through their social media posts:

Remembering the founder of our great Nation Quaid-e-Azam Muhammad Ali Jinnah on his 71st death anniversary. Committing ourselves to his vision of a tolerant & an inclusive Pakistan is the greatest tribute that we can pay him on this day.#QuaideAzam

Lets pay tribute to the father of nation & remember his struggles who hid his disease just for the betterment of nation/Pakistanis. He taught us that nothing's more valuable than this land which is made on لاالہ الا اللہ . Let's not fear to sacrifice anything. #QuaideAzam #Jinnah pic.twitter.com/AV7OG2zNL2

"There is no power on earth that can undo Pakistan"

To mark the day, various programs have also been chalked out by educational institutions and political, social and cultural organizations to shed light on the personality and leadership of Quaid-e-Azam Muhammad Ali Jinnah.

Father of the Nation Quaid-e-Azam Muhammad Ali Jinnah passed away on 11th September 1948 shortly after achieving freedom for the nation.