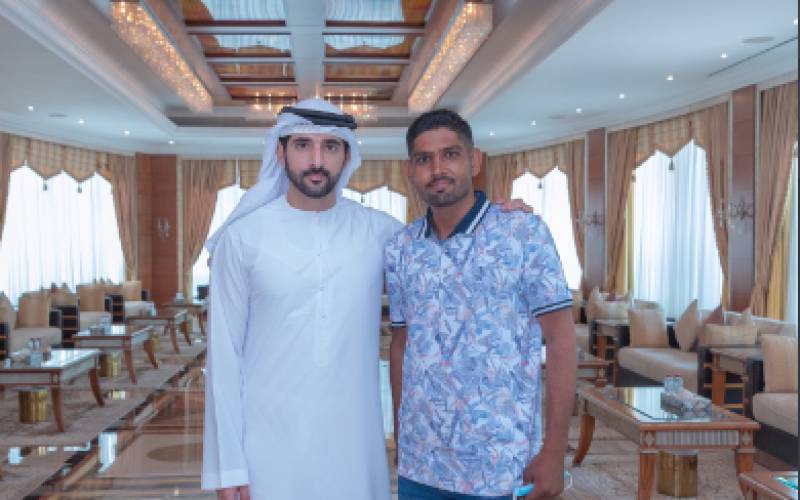 Moved by the ordinary citizen's action, the Prince invited the man over to the Royal Palace.

The delivery man who goes by the name Abdul Ghafoor Abdul Hakeem gained appreciation on social media after his video of removing two concrete blocks dangerously laying in the middle of the road went viral.

“An honor to meet you Abdul Ghafoor, a true example to be followed,” tweeted Sheikh Hamdan.

“An act of goodness in Dubai to be praised. Can someone point me to this man?” he captioned his story.

Sheikh Hamdan had earlier posted the video as an Instagram story, inviting the public to help him identify the rider.

An honor to meet you Abdul Ghafoor, a true example to be followed. pic.twitter.com/eRQ0nuYAZF

Sheikh Hamdan had been looking for Ghafoor ever since Khaleej Times reported him. Posting the viral video, Sheikh Hamdan said: “An act of goodness in Dubai to be praised. Can someone point me to this man?”

A while later, he posted that the “good man” had been found. “Thank you, Abdul Ghafoor, you are one of a kind. We will meet soon!”

Speaking to Khaleej Times, the Pakistani national said that he "received a phone call from Sheikh Hamdan. “I could not believe my ears.”

Further adding, Ghafoor said that “The Dubai Crown Prince thanked me for what I had done. He also said that he was out of the country right now and promised he would meet me as soon as he was back.”

Ghafoor was rewarded by Talabat for his actions by giving him a ticket to fly back home so he could spend time with his two-year-old son.

KARACHI – A Pakistan national has earned praise from rulers of Dubai and public after his video of a little act ...