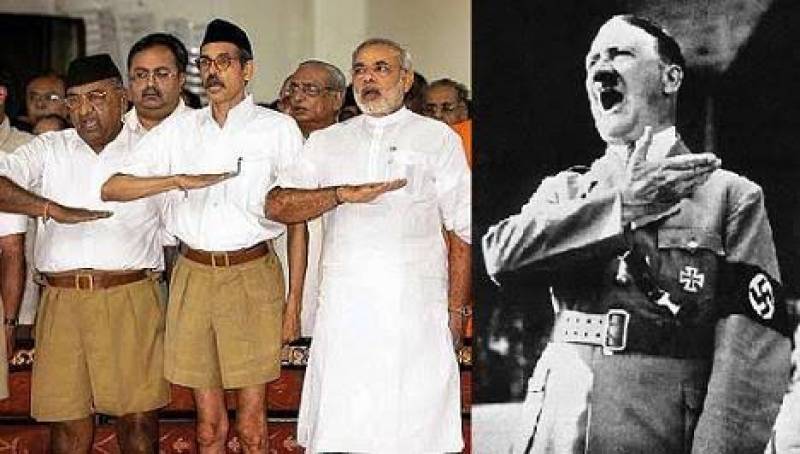 The abrogation of article 370 of the Indian constitution, itself used to effect a fraudulent and conditional “accession”, had long been a dream of Nazi-inspired Hindutva fascists of Rashtriya Swayamsevak Sangh (RSS). This move is a clear violation of multiple international laws and India’s own constitution, such as it is. It seeks to settle a large number of Indian Hindus in Indian-occupied Kashmir to alter its Muslim-majority demography, with the ultimate aim of rendering the UN-mandated plebiscite infeasible.

The curfew, crackdown & impending genocide of Kashmiris in IOK is unfolding exactly acc to RSS ideology inspired by Nazi ideology. Attempt is to change demography of Kashmir through ethnic cleansing. Question is: Will the world watch & appease as they did Hitler at Munich?

Kashmiris have not yet forgotten that in August - November, 1947, RSS colluded with the Hindu Maharajah of Kashmir to perpetrate the horrific genocide and exodus of Jammu, whereby hundreds of thousands of Muslims were massacred and an estimated half a million forcibly displaced. This reduced the region’s Muslim majority to a minority. This time, RSS is working through BJP, its political wing, to complete its original mission of ethnic cleansing of Kashmiri Muslims. The genocide is being substituted by settler colonialism, but the objectives remain the same. Kashmiris and Pakistan will not allow it.

Kashmiris were promised their inalienable right to self-determination through a UN-supervised free and fair plebiscite in April 1948. This remains the only just and peaceful solution to the Kashmir issue. For seven long decades, India has violated international law and reneged on its own pledges to let the UN conduct a plebiscite in Kashmir. Further, it has turned Kashmir into the most densely militarised region in the world and visited unspeakable horrors on Kashmiris.

In their valiant pursuit of freedom from the Indian occupation, Kashmiris have sacrificed more than 70,000 lives since 1989 alone and endured untold atrocities. They remain undaunted. Kashmiris will fight and defeat this ghastly occupation, and as they do, Pakistan will support them by any means necessary.