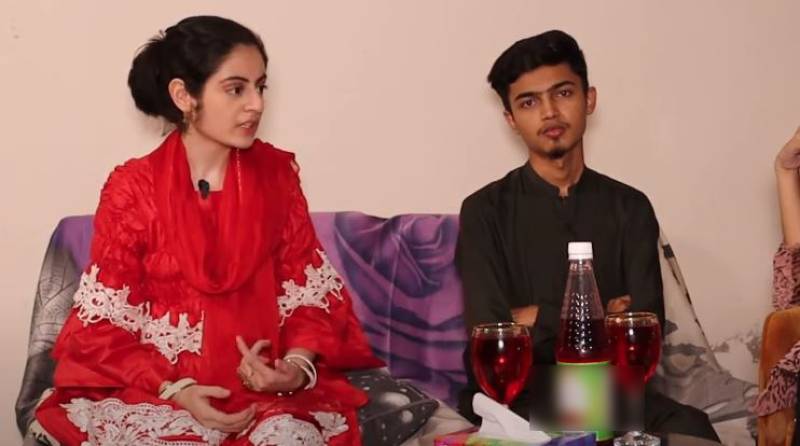 LAHORE – Dua Zehra, the teen who first went missing from her Karachi residence in mid-April and was later found to have married Zaheer Ahmed, tells how she met the love of her life.

In an exclusive interview with a YouTuber, Dua revealed that she first interacted with Zaheer on a mobile game around 3 years back. She added that her family restricted her from playing the game later and then the duo started chatting on different games.

The teenager, who made headlines in recent times, dismissed the notion that she was kidnapped. She clarified that no one drugged her or forced her to make any statement, reiterating that she tied the knot out of her free will.

"I travelled to Lahore from Karachi alone," Dua said, mentioning that she wanted to marry Zaheer, and therefore, Allah helped and protected her.

Responding to an age-related question, Dua said her birth certificate was forged, saying that her actual age was 17 years.

Narrating her emotional meeting with her parents in the Sindh High Court, the girl mentioned that her parents forced her to change her statement. My mother forced me to tell the judge that I have to go with my parents which I refused, she said, adding her parents make false statements.

She mentioned that she got hitched as per Islamic laws, however, she confessed to being sorry for her parents. “I would like to request my parents to accept me and Zaheer with a big heart”, she said, adding that she is fully aware of the ordeal they faced.

Dua also alleged that her father wanted to marry her off to her nephew to get the plot he had a dispute over with his brother.

Her husband Zaheer Ahmed said he deals in mobile phones. The 21-year-old said he recently passed his intermediate and earns more than Rs60,000 per month from his business.

KARACHI – The top court in Pakistan’s southeastern region ruled that Dua Zehra – the girl who was ...

The duo appeared in an exclusive interview days after the Sindh High Court ruled that Dua is free to decide her future.

Earlier, Dua’s family registered a case in Karachi on April 16, alleging that their underage daughter was kidnapped.

KARACHI – In another twist in the case of Dua Zehra, who fled from her Karachi home and tied the knot with Zaheer ...