VIDEO: Judge beaten up by PTI MPA's husband in Islamabad 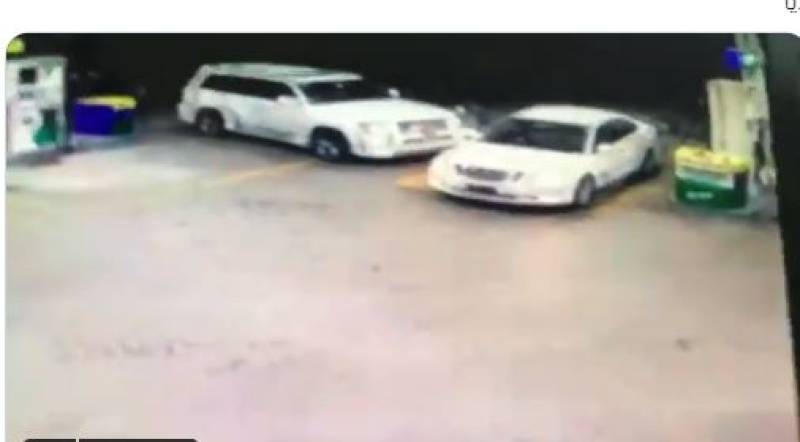 ISLAMABAD - The husband of PTI MPA has been detained on charges of scuffling and slapping an additional and district sessions judge at a fuel station in the Red Zone of the federal capital.

The issue apparently developed over an issue of overtaking while driving in the most sensitive area of the country, The Nation reported while quoting sources on Sunday.

The judge also retaliated by shooting which is seen in the  Twitter video into the air to scare the MPA’s husband with his pistol, who was continuously attempting to thrash the judge, the sources informed.

On a phone call, the local police also rushed to the spot and detained the accused, who has been identified as Chaudhry Khurram, the sources added.

The police shifted the judge to the Poly Clinic for a medico-legal report after he told the investigators that he had developed a fracture in the leg due to the powerful blow of the accused, the sources disclosed.

They also said that Chaudhry Khurram, the husband of PTI MPA Abida Raja, was traveling in his vehicle (KA-004) when he overtook another vehicle (AOB-992) being driven by ASJ Malik Jahangir in the Red Zone.

The source said that an exchange of harsh words occurred between the two on the issue of wrong overtaking. They said the judge drove to the fuel station while ignoring Chaudhry Khurram.

“The judge stopped his car at the fuel station to get fuel when all of a sudden Chaudhry Khurram stormed into the fuel station in his Land Cruiser and pounded upon the judge who was sitting in the car,” the sources said.

They added that the spouse of the MPA slapped the judge who later took out his pistol and fired gunshots in the air forcing the former to take refuge behind a filling machine. The firing by the judge also spread a wave of terror in the heavily guarded Red Zone as well as among the workers of the fuel station and other people present there.

A senior official of the Islamabad police told The Nation that a verbal clash had occurred between the judge and the husband of the MPA while they were cruising towards the Convention Centre from the Parliament House side.

He said the judge ignored the issue and drove his car to the fuel station to get petrol when Chaudhry Khurram chased him and attacked him all of a sudden. “The judge fired two gunshots in the air while sitting in the car to secure himself from Chaudhry Khurram who was thrashing him with punches and slaps,” he said.

The police are investigating the matter from all angles as both the parties are going to lodge complaints against each other, he said adding that the police would solve the matter on merit.