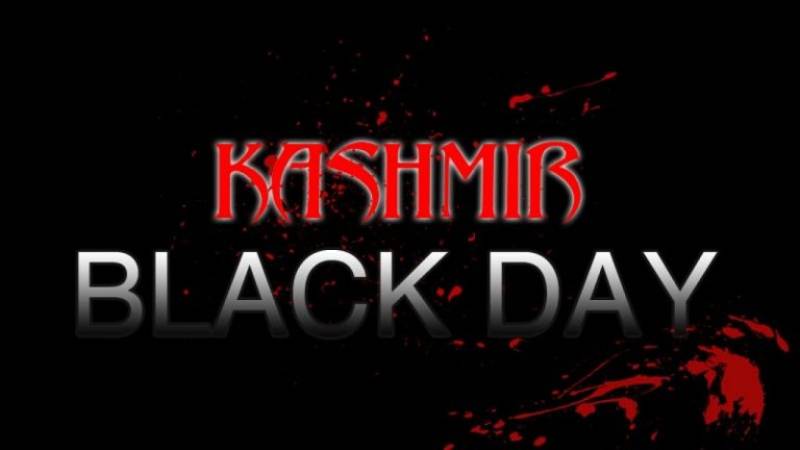 SRINAGAR – Kashmiris around the globe are observing ‘Black Day’ to express complete dissociation from India as the country celebrates its 75th independence day.

A complete lockdown is being observed on the occasion in Indian occupied Kashmir. Call for a complete strike has been given by Hurriyat leaders. Rallies are being held and protest processions will be taken out in Indian Illegally occupied Jammu and Kashmir and Azad Jammu Kashmir.

All business centers and shops are closed while no traffic is on the roads. Participants of the protest rallies are wearing black bands around their arms and heads to condemn and protest on the Indian atrocities.

Black flags are hoisted atop the buildings by the protesting Kashmiris at both sides of the LoC against the continued Indian atrocities including the 13th martyrdom anniversary of eminent Kashmiri leaders Sheikh Abdul Aziz and scores of others by the Indian troops during their march for Srinagar from Muzaffarabad on August 11, 2008.

ISLAMABAD/SRINAGAR – People of Pakistan and Kashmiris on both sides of the Line of Control and all over the world ...

Meanwhile, in Azad Jammu Kashmir, processions were brought out in Muzzaferabad and all other nine district headquarters of Mirpur, Kotli, Bagh, Bhimbher, Havaili, Hattiyan, Palandri, Rawalakot and Neelam valley by the people belonging to walks of life to reiterate severe hatred against the Indian imperialism.

On Saturday, continuing with its tradition, the repressed citizen’s hoisted Pakistani flags in occupied Kashmir on the occasion of Pakistan's 75th Independence Day. Special prayers were also offered for safety and integrity of Pakistan and freedom of Jammu and Kashmir from illegal occupation of India.