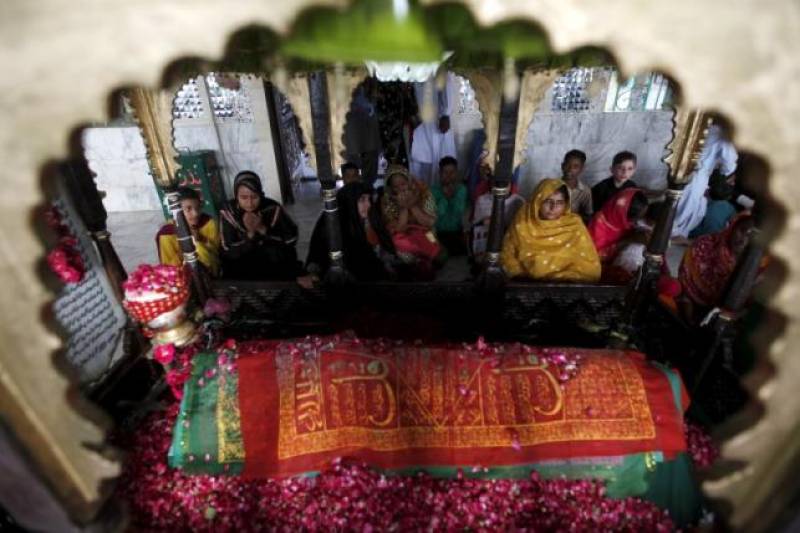 KARACHI (Web Desk/Agencies) - The lean days appear to be over for Mor Sahib, an 87-year-old crocodile venerated by Pakistan's tiny Sheedi community, as pilgrims once again flock to a shrine in Karachi that has been shunned for years amid fears of Taliban attacks, Samaa TV reported.

The ageing reptile, his leathery skin fissured by time, waddled out of the murky water towards a crowd of visitors wearing garlands, all hoping to lure him with handfuls of sweets and choice pieces of goat neck. 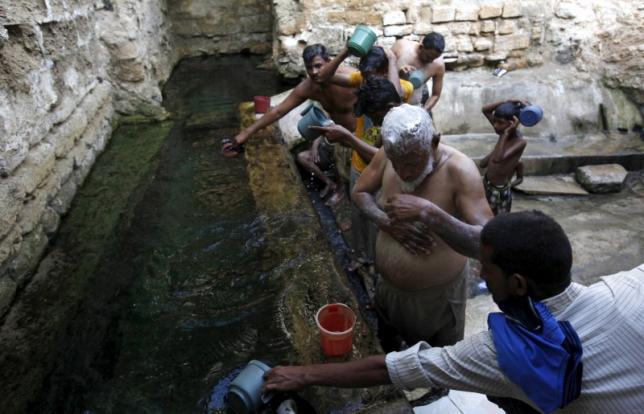 People bathe with spring water at the shrine of Hasan-al-Maroof Sultan Manghopir, better known as the crocodile shrine, on the outskirts of Karachi, Pakistan October 11, 2015.

The pilgrims are Pakistani Sheedis, whose ancestors came from Africa and are drawn from different Muslim sects, making them a potential target for hardline militants who want to impose their strict interpretation of Islam on others.

Their new-found confidence coincides with a major crackdown on crime and militancy by paramilitary Rangers in the southern port city of 20 million people where the shrine is located, which has seen murder levels drop sharply.

The Pakistani military has also been carrying out a major offensive against the Taliban movement in the northwest of the country since June, 2014, and its pursuit of militants gathered pace following the massacre of 134 school pupils in December. 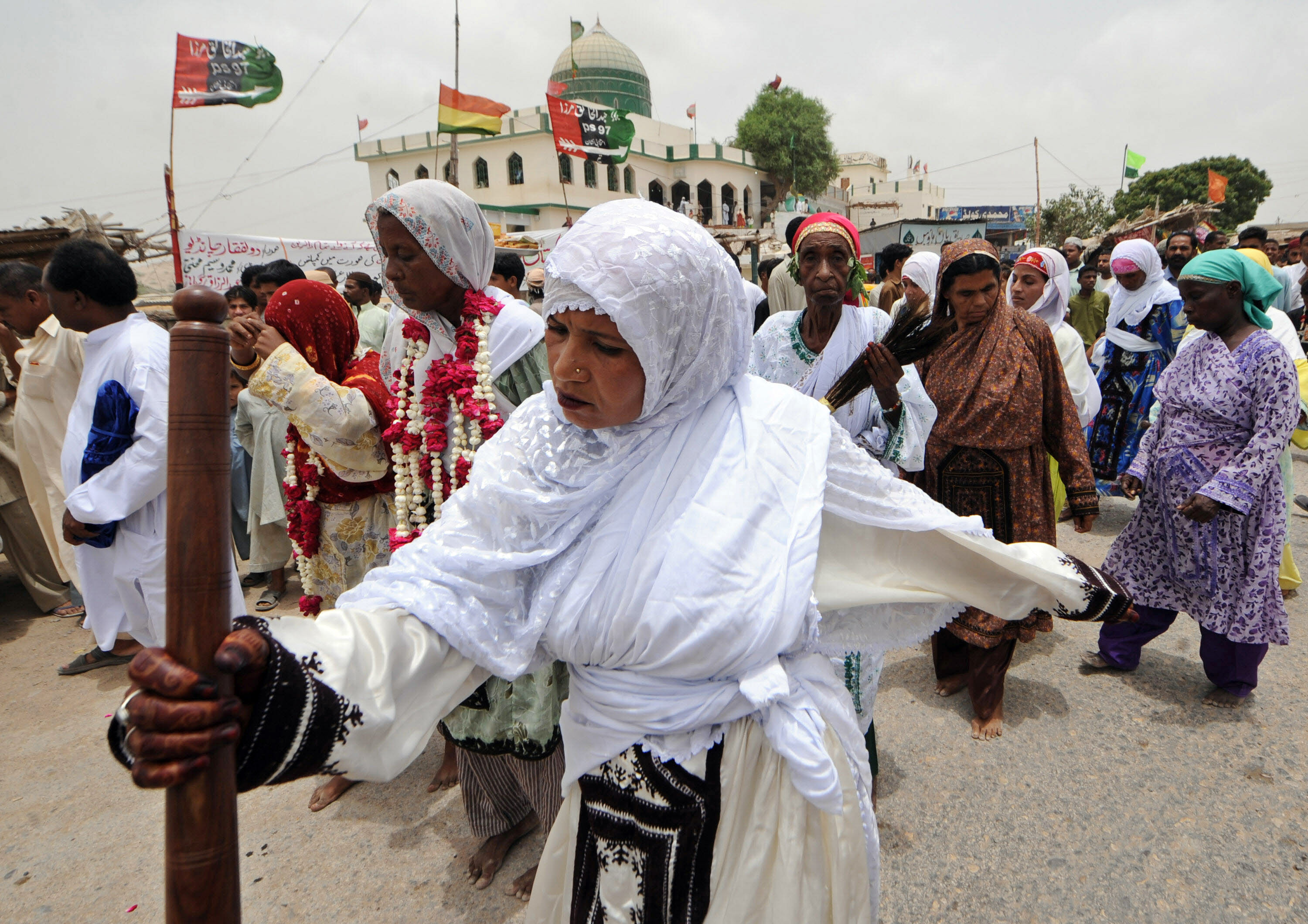 Pakistani devotees dance on the third day of the Sheedi festival at The Manghopir Shrine on the outskirts of Karachi on July 6, 2008. The Sheedi festival, named after the inhabitants of the area, is held near Saint Kwaja Hasan's shrine which is said to be the oldest Sufi shrine in the city. Sheedis, a lower class community in the city, follow the legend which says that saints found redemption here and during the festival feed the sacred crocodiles, beat drums and other musical instruments and sing songs.

"Three, four years back, armed Taliban had become so influential that police were afraid of them at the nearby police station they killed 18 policemen," said shrine caretaker Mohammed Yaseen, light glinting off tiny mirrors stitched into his traditional cap.

"Since the Rangers and police operation (in Karachi), people have started to return."

Militant attacks across the nuclear-armed nation of 190 million people have fallen by around 70 percent this year.

In Karachi, Pakistan's economic hub, violence is still rife. But police say it is getting better, with 3,082 people murdered there since the crackdown started in 2013 compared with 4,790 murders in the two years before it began. 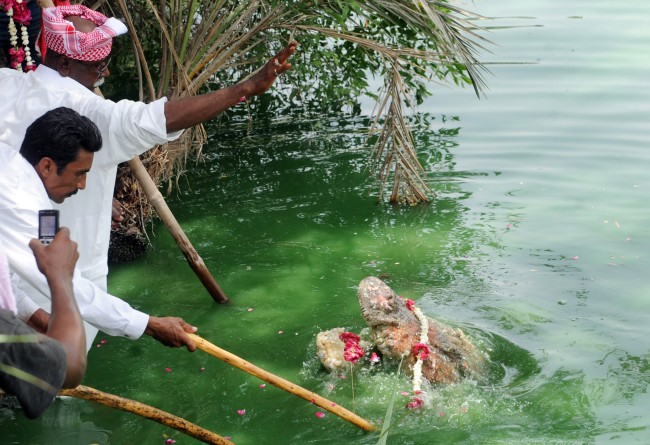 Among them were Taliban sympathizers whose interpretation of Islam had no place for crocodiles, around 100 of which inhabit the shrine's pond. The site closed for 10 months in 2010 and a charity fed the crocodiles in secret.

The shrine quietly reopened in 2011, but only a handful of worshippers dared come. Gradually, improving security meant 100 people might turn up on a busy day last year. Now crowds of more than 1,000 flock to the shrine several days each week.

The drop in violence has also raised Sheedi hopes that they might hold their annual four-day festival before the end of the year. It has been cancelled for the last five years for fear of attack.

At the autumn celebration, four Sheedi communities slaughter goats and dance to a drum beat before the crocodiles, who are showered with rose petals and anointed with perfume and saffron.

"This year we are planning to hold the festival, so our young generation comes to know about our traditions," said Yaqoob Qambrani, chairman of the Pakistan Sheedi Alliance. 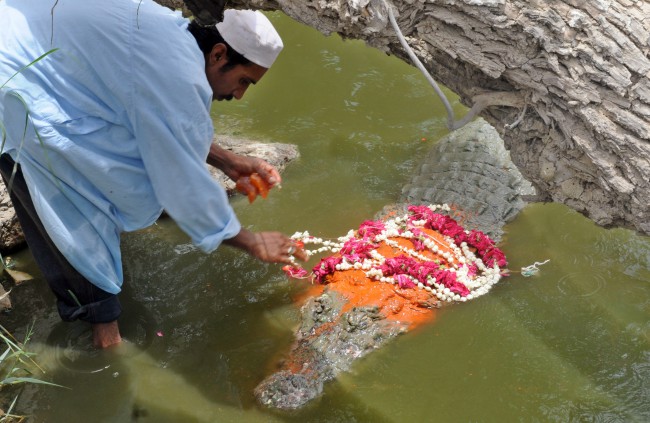 While there is no reliable data available, estimates of the number of Sheedis in Pakistan vary widely from tens of thousands to a few million.

The community believes the crocodiles living in the shrine's pond are the disciples of saints. A wrinkled man at a wooden kiosk sells worshippers rose petals and other offerings.

At the inner entrance to the shrine hall, a bearded man in a small black cap blessed pilgrims by patting their heads and shoulders with peacock feather quills. 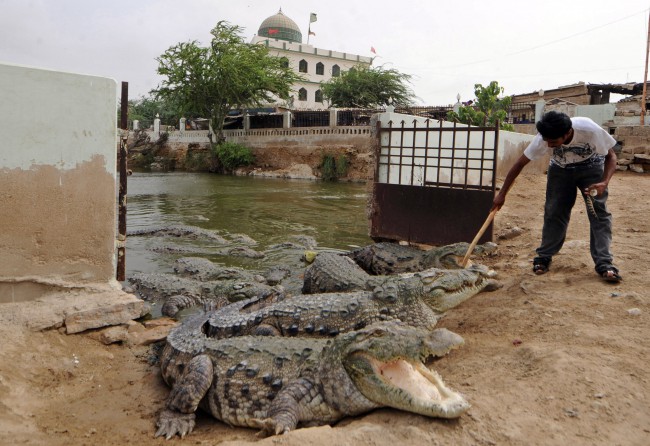 Among them was driver Mohammed Arif, 30, and his three children, whose bright, freshly starched clothes shone in the gloom.

"My father used to bring me to this shrine, now I am bringing my children," he said happily.