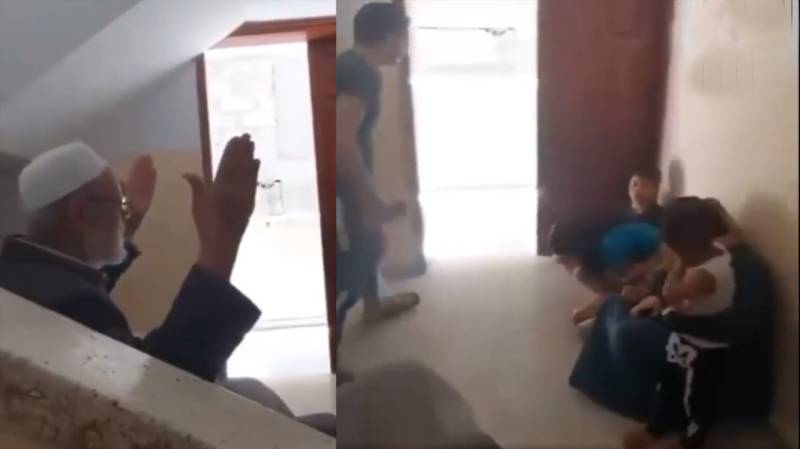 JERUSALEM – As Israeli forces stepped up their bombardment at Gaza amid ethnic cleansing of Palestinians, a miracle happened when a family including children escaped death while praying against Israeli airstrikes that have killed more than 145, including 41 minors since Monday.

In the astonishing clip, an aged man can be seen praying along with his children when a rocket hit their home and they all escaped unharmed amid the deadly attack which purportedly targeted civilians.

Following the airstrike, the lionhearted family instead of running from the premises to avoid other attacks started chanting Takbir ‘Allah o Akbar’ means God is the greatest.

Meanwhile, Israel’s bombardment at Gaza entered the sixth consecutive day. More than 145 Palestinians, including 41 children, have been killed while more than 1,000 others have been wounded since Monday.

As the world expressed condolences over the massacre in the Gaza strip, the US reaffirmed support of Israel PM Benjamin Netanyahu for their right to defend the Jewish state.

Today the President spoke with Israeli Prime Minister Netanyahu, reaffirmed his strong support for Israel’s right to defend itself against rocket attacks from Hamas and other terrorist groups in Gaza, and condemned these indiscriminate attacks against Israel. pic.twitter.com/baHWh1b6Q2

A statement issued by the White House stated ‘Biden expressed his strong support for Israel's right to defend itself against rocket attacks by Hamas and other terrorist groups, in his call with Netanyahu, while also emphasizing his clear concern over the deadly flare-up and casualties on both sides.