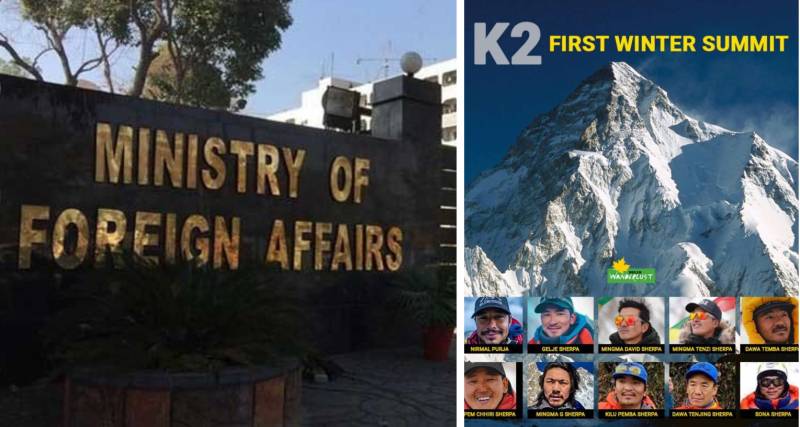 ISLAMABAD – The Foreign Ministry of Pakistan on Sunday has congratulated a team of ten climbers from Nepal who became the first in winter to reach the summit of the savage mountain.

Taking it to Twitter, Spokesperson Zahid Hafeez Chaudhri said, Heartiest congratulations to the team of Nepali mountaineers on a first-ever winter ascent of K2, world’s second-highest mountain — one of the most coveted achievements in mountaineering. We wish them a safe return.”

Heartiest congratulations to team of #Nepali mountaineers on first-ever winter ascent of #K2 ????????, world’s second-highest mountain — one of the most coveted achievements in mountaineering. We wish them a safe return.

The Prime Minister Office also shared a video of the Nepali mountaineers standing atop the 'savage mountain' after they completed the climb.

Earlier, K2 was the only mountain higher than 8,000m not to be conquered in winters. It is located in the Pakistani portion of the Karakoram range along the Chinese border and is known as the world’s most dangerous peak.

K2 was first climbed in 1954 by Italian climber Achille Compagnoni. So far, 86 climbers have lost their lives while only 450 climbers have managed to climb it.