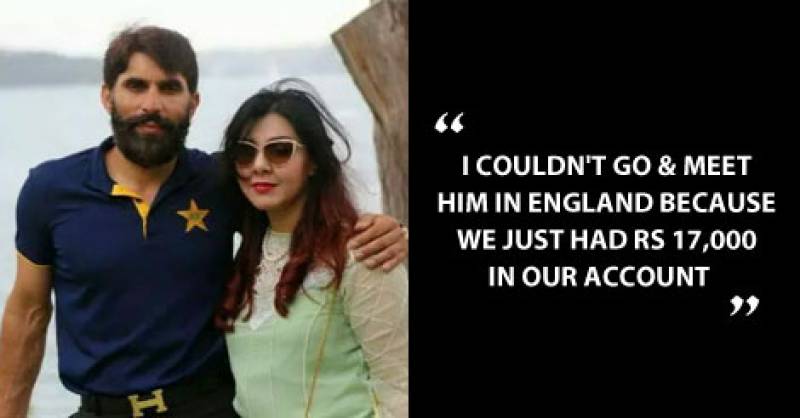 'Tuk Tuk' Misbah-ul-Haq has broken all records and become the most successful captain in the history of Pakistan. This, of course, wouldn't have been possible without his immense hard work, dedication, and patience.

More importantly, there's a saying that goes, "Behind every successful man, there is a woman", and this certainly holds true of this leading man's relationship at home, with none other than his loving wife Uzma.

Very few people are in tune with the hardships he had to face and the struggle he had to go through to reach to where he is today. And there's without a doubt a deeper and heart-wrenching story behind the son of a principal from Miyanwali who stood the test of time to lead his country to the World's No.1 Test Ranking for the first time ever in the history of Pakistan.

“At the start he would give me Rs 10,000 to run the house and that used to be enough for us back then. And he got me a car so that I could travel to university, where I was doing my Masters, so I always had freedom too. But I did keep hearing – though not from his friends and family – that he was never picked for the national team after our marriage, and it was my kismet (luck) that was bringing him down.

In some subcontinental cultures, there is this idea that a bride brings her luck to her new home. “So I would blame myself for it. I would pray after Namaz, after Tahajjud, that God give him everything he had wished for. All I prayed for was for him to get back in the team.

At the start of 2007 he asked me to just give him six months or so. He told me he didn’t want to go to any functions or weddings or birthdays. Just wanted to focus on his cricket.

He had bought me a Sony video camera for our anniversary the previous year. He would take that camera to nets every day, record his batting, then come home and just go through that day’s video during the night. That’s all he did every night.

At that same time he had put in our savings to buy a car from someone, and that guy ran off with the money. That year Misbah was playing in England, and I couldn’t go and meet him because we just had Rs 17,000 in our account, and I didn’t know what to do. Thankfully he had to come back earlier than scheduled from England. Because he had been selected for the 2007 World T20 camp.”