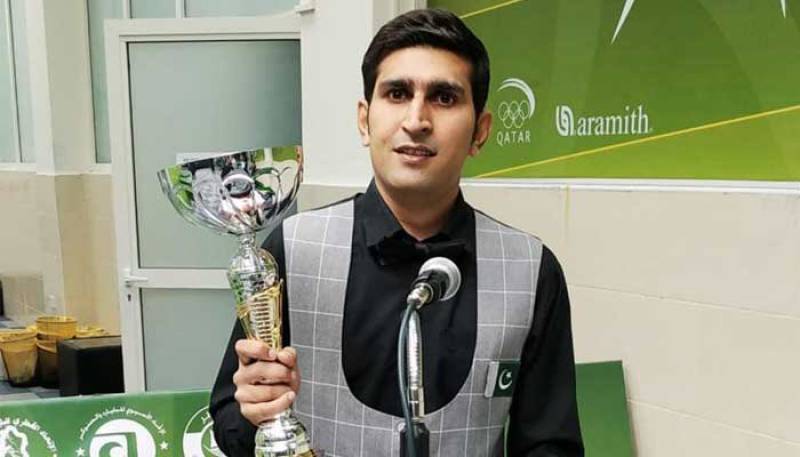 Reports quoting sources said Babar achieved the feat on Friday after he outclassed his peer from arch-rival India starting his campaign in the International Billards Snooker Federation 6 Reds World Cup.

The fully prepared Pakistani player didn’t let Singh win even a single frame while finishing the group D’s match with 5-0. Singh turned nervous and miss the crucial colour balls that cost him the game, he was just a blackball away from the win if he hadn’t missed pocketing it.

Babar found it just at the pocket’s brink and cueball at an ideal position as the ball had wobbled in Chadha's attempt to pocket it making him take the initial lead.

The ill-fated Indian player also made a number of mistakes in the second frame when he missed pocketing an easy pink ball placed on the original position. The blunders benefit Pakistan’s Masih, who took the lead at a score of 2-0. Following Babar’s win, the Indian cueist didn’t resist and lost the next three frames.

Meanwhile, Pakistan’s Haris Tahir also remained victorious in his opening game of the tournament as he outclassed Oman’s Husain Allawati at a score of 5-2.

The 21-year-year took the 2-0 lead after winning the first two frames at 37-9 and 45-8 but failed to win the third frame as he pocketed the red ball only twice.

Allawati clinched the third frame with 29-02 to decrease his deficit. He also defeated Haris in the fourth frame, despite efforts by Haris. Pakistanis cueist finished the tournament with 5-2 eventually after winning the last frame.