Kashmiris mark Accession to Pakistan Day on both sides of LoC 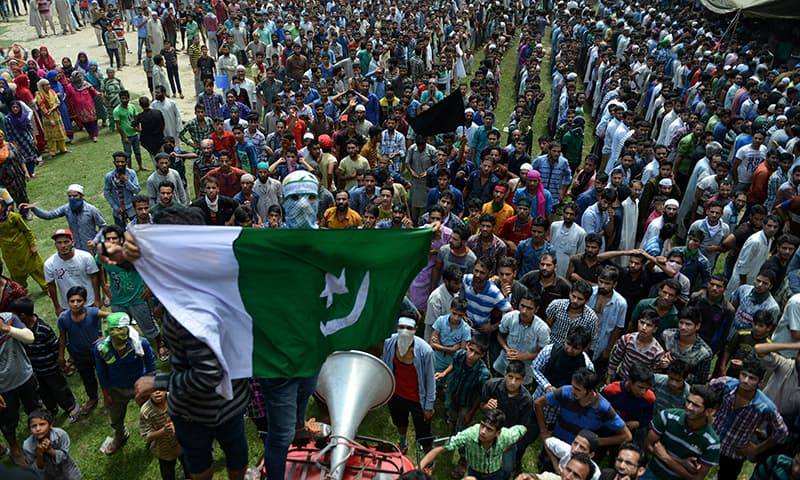 MUZAFFARABAD/SRINAGAR – Kashmiris on both sides of the Line of Control and all over the world observed the Accession to Pakistan Day on Sunday with a renewed pledge to continue the struggle for freedom from Indian occupation and complete merger of Jammu and Kashmir with Pakistan.

On this day in 1947, genuine representatives of the Kashmiris unanimously passed the resolution of Kashmir’s Accession to Pakistan during a meeting of the All Jammu and Kashmir Muslim Conference at the residence of Sardar Muhammad Ibrahim Khan in Srinagar.

ISLAMABAD -Jammu and Kashmir National Front (JKNF) on Sunday while terming 19th July as a defining moment in ...

On the other hand, an analytical report released by Research Section of Kashmir Media Service, today, revealed that over 450,000 Kashmiris have laid down their lives for Jammu and Kashmir’s freedom from Indian occupation and its Accession to Pakistan during the last over seven decades.

The report said that the celebrations of Pakistan National Day, raising of its National Flag, singing of Pakistan’s National Anthem, raising of slogans in favour of Pakistan and burial of Kashmiri martyrs, shrouded in Pakistani Flag, vindicate the fact that the people of Kashmir have strong commitment with the Islam Republic of Pakistan.

Speakers at a roundtable organized by APHC-AJK chapter in Islamabad, said that Kashmiri people had ascertained their destiny to be a part of Pakistan.

And in occupied Kashmir, clashes erupted after Indian troops launched a cordon and search operation in Anchar area of Soura in the Srinagar outskirts, according to Kashmir Media Service.

Meanwhile, the APHC leader, Advocate Devinder Singh Behl in a statement issued in Jammu expressed grave concern over the new construction policy approved by the Indian authorities for Jammu and Kashmir.

He said the policy has paved the way for Indian forces to occupy Kashmiris' lands and carry out construction and other activities.