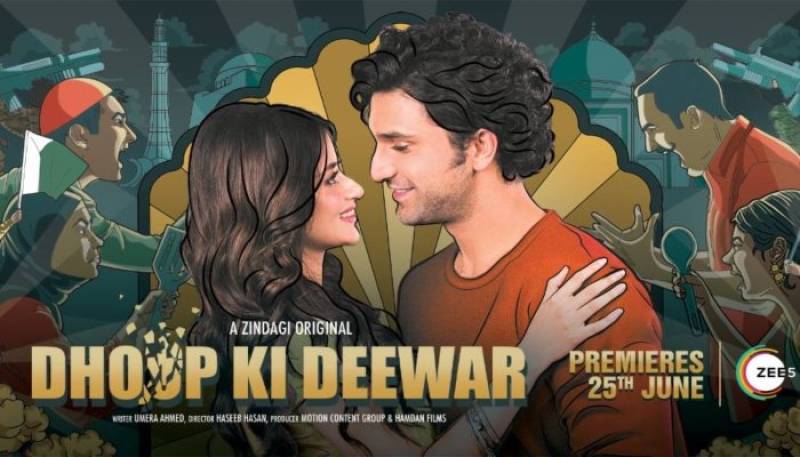 Ahad Raza Mir and Sajal Aly's Dhoop Ki Deewar is a story of human emotions and the deep-rooted hate between Pakistan and India.

Written by Umera Ahmed and directed by Haseeb Hasan,  Dhoop Ki Deewar is a story of two youngsters, Sara and Vishal, who are divided by borders but united by the grief caused by deaths of their fathers in the ongoing conflict in the Indian Illegally Occupied Jammu and Kashmir (IIOJK).

The trailer of the drama released on June 15 caused a furor on the internet as fans lambasted the storyline. Pakistani Twitter users were enraged, considering the plot is "disrespectful to Kashmiris". The keyboard warriors have declared that peace with India is not an option.

#BanDhoopKiDeewar became a top trend this week as people continued to protest against the storyline, which shows a Muslim girl (played by Sajal) romancing a Hindu boy (played by Ahad).

No one has the right to sell the blood of thousands of martyrs and lives of millions of Kashmiris. Each and every human on this earth has the right of freedom, life and plebiscite. #BanDhoopKiDeewar pic.twitter.com/JcqGsun2ZL

How could we allow to telecast such nonsense serial when we are witnessing about 2 years of curfew in Kashmir? Writer of this serial as well as whole cast should be ashamed who seems to be supporting brutality of Indian forces in IOK. #BanDhoopKiDeewar pic.twitter.com/gGM3jzA8OY

Pakistanis should avoid humanizing the occupier India in films. While India preaches hate towards Kashmiris and Pakistanis in their movies (Fanaa, Gadar, Sarfarosh, etc.) some Liberal Pakistanis are living in La La land and advocate for love with Fascist India. #BanDhoopKiDeewar

Kashmir is bleeding and what we are doing? Making these filthy dramas for the sake of PR. One needs to ask @fawadchaudhry

that "Is blood of Kashmir's that cheap?". This has happened many times that muslim girl is falling for Hindus and we are enjoying it. Poor.#BanDhoopKiDeewar

It wasn't romanticism and emotions which brought peace. History itself reveals that emotions and love are the different invisible sides of the war. It is the war that brings peace, as revealed by history.#BanDhoopKiDeewar

Aman Ka Tamasha failed the first time and it will fail the second time too. but it will run long enough for many to make a quick buck off of it.

You can not build peace on blood, occupation & ethnic cleansing. #DhoopKiDeewar

We never had and we never will be together, India and Pakistan are two different nationalities. #Kashmir #Kashmirilivesmatter#BanDhoopKiDeewar pic.twitter.com/J5kppHG7o2

The writer Umera Ahmed took to social media to clarify her stance on the matter by posting a lengthy clarification on Instagram. She labelled the love story as a “social tragedy,” where she highlights the effects of war on individual lives.

Dhoop Ki Deewar, a Zindagi Original, will be premiered on 25th June on ZEE5.

The trailer for Dhoop Ki Deewar is out and Ahad Raza Mir and Sajal Aly are back together to woo everyone with a tale of ...