NA-120 by-election: An alarming change in the voter's behaviour 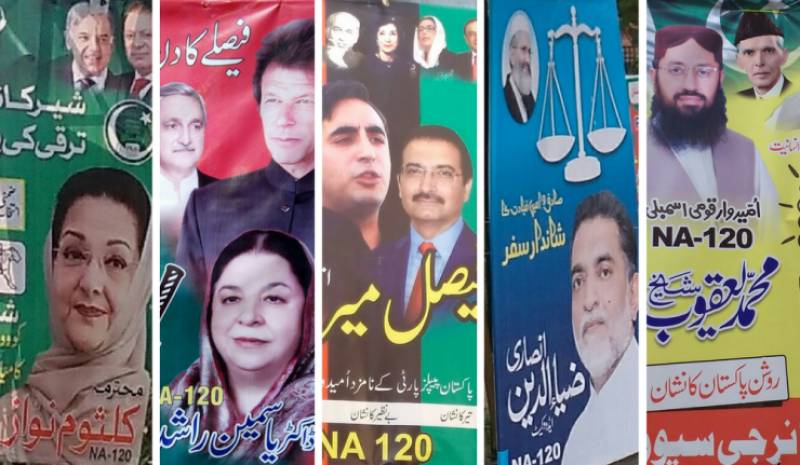 LAHORE - The most sought after by-election of NA-120 is over. The constituency remained with Pakistan Muslim League Nawaz - by a marginalized victory of Kalsoom Nawaz over Pakistan Tehreek-e-Insaf’s Yasmin Rashid. But the ‘marginalised victory’ isn’t the only thing PML-N - or any other mainstream political party - needs to be worried about right now.

The statistics shared by ECP shows that the voting behaviour in this constituency is more troubled than just having or favouring nepotism. The trend of wasting votes instead of casting them and emergence of TLP is a serious issue which needs immediate addressing.

PML-N’s Mian Nawaz Sharif had attained 91,683 (59.8%) votes and won the seat while PTI’s Yasmin Rashid by getting 52,345 (34.13%) votes stood second. The third and fourth positions went to the candidates of PPP and  Jamiat-e-Ulema-e-Islam (Fazal), respectively.

PML-N, apparently, did obtain 60.65% votes from the casted votes.

But the difference of percentage of the votes achieved by political parties from votes cast and registered is both astonishing and disturbing.

The above mentioned statistics show that 48.16% voters didn't use their right. 30.99% voters put their trust on Nawaz Sharif in a constituency which is considered to be the hub of PML-N and 17.69% voters voted in favour of PTI, a small number of votes went to PPP and JUI-F too.

The by-elections were held in NA-120 after a decision by the apex court which led to the disqualification of then-PM Nawaz Sharif in September, 2017. The result of NA-120 came out just as expected, PML-N's candidate Kalsoom Nawaz won the election and 2nd position went to PTI’s Yasmin Rashid.

However, the real trouble that statistics show is PPP and JUI-F vanished from 3rd and 4th spot with two new political parties with an extremist background emerging from the dark hole.

In 2017 by-election , due to the fact that the PTI, the PML-N and the PPP did a door-to-door campaign, the expectations for a huge voter turnout were obvious. However, it decreased to a 39.42% despite the fact that the number of registered voters increased.

A percentage of votes received by the candidates, in NA-120, to the votes cast is as follow:

Also, the percentage of votes attained by political parties to the total number of registered votes shows that NA-120 doesn't belong to anyone anymore. The ruling PML-N received a total of 19.18% while opposition PTI gained 14.63% of total votes registered in the constituency. In other words, only 19.18% and 14.63% of total population of NA-120 put their trust in PML-N and PTI, respectively.

Not only do these statistics give us a worrisome picture of voter's behaviours but also, the emergence of TLP and Hafiz Saeed's MML is something that is very troubling to majority of Pakistanis. The fact that the candidates of these two parties gained more votes than PPP's candidate shows the extremist interests that still prevail in the society. From the changes obvious in the statistics, it is quite safe to say that immediate measures are mandatory for the sake of democracy and banning the parties or candidates which support any banned group or extremist ideology!