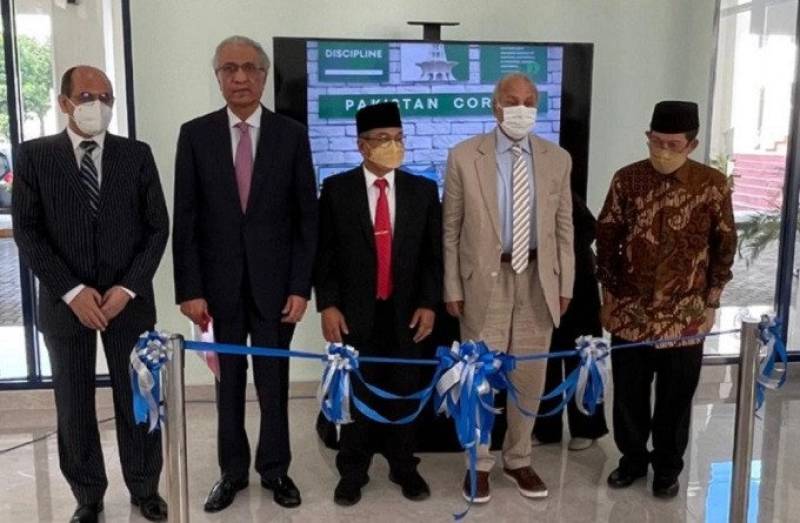 JAKARTA – Chief Justice of Pakistan Gulzar Ahmed, who is on an official visit to Indonesia, inaugurated the Pakistan Corner and Allama Iqbal Room in the library of Al-Azhar University, Jakarta.

A statement issued by the Supreme Court stated that CJP Gulzar is also accompanied by Justice Ijaz-ul-Ahsan. Pakistan’s top judges are on a four-day visit to SouthEast Asian country to participate in the 2nd Judicial Conference of Constitutional and Supreme Courts/Council of OIC Member/Observer States.

The inauguration event was held on Saturday at Al-Azhar University, which was attended by the university rector, faculty members, and limited students in wake of restrictions imposed to curb Covid spread.

During the ceremony, Rector Asep Syaifuddin expressed gratitude to the Pakistani government for the initiative. The initiative would bring the youth of both countries closer to each other, he opined.

Hon'able Chief Justice of 🇵🇰, Mr. Justice Gulzar Ahmed, along with Hon'able Justice Aijaz Ul Ahsan is on a visit to 🇮🇩 on the invitation of the @officialMKRI to attend 2nd J-OIC@ForeignOfficePk pic.twitter.com/g0i3QPjaqA

Justice Ejaz ul Ahsan commended Indonesian authorities for the warm hospitality during their brief. He also appreciates the efforts of the Embassy of Pakistan and Al-Azhar University in enhancing educational collaboration.

The establishment of Pakistan Corner and Sir Allama Muhammad Iqbal Room at the university would provide an opportunity for Indonesian students to explore the history and literary heritage of Pakistan and the thoughts and philosophy of the poet of the east, he said.