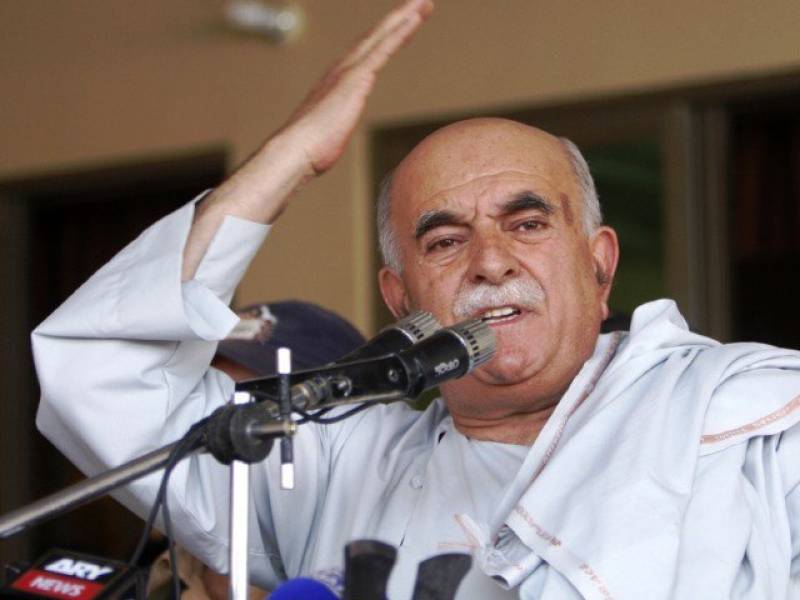 Previously, Pakistan Tehreek-e-Insaf (PTI) leader Naeemul Haque had also termed Mullah Mansour as a martyr during a TV talk show in June, just a week after a US drone him in Balochistan. "Fighting to liberate your homeland is a just cause," Haque said to explain his remarks.

In an interview with Aaj News, Achakzai also questioned government's promises on security matters. He said that he did not accept the National Security when N was for Nisar and S for Shahbaz, referring to Federal Interior Minister Chaudhry Nisar Ali Khan and Punjab Chief Minister Shahbaz Sharif.

Responding to a query he said that incumbent government was not fulfilling its promise of early construction of the western route of the China-Pakistan Economic Corridor (CPEC). "We cannot expect anything from the locals unless we grant them their due rights," he added.

When asked if the government should speed up the repatriation process for Afghan refugees, the PK-MAP chief said that the people of Afghanistan were in Pakistan only as guests and that they were meant to return to their homeland.

To another question, he said: "I do not support the idea that Afghan refugees should be given the Pakistani citizenship or issued CNICs."

On the occasion, he also told the TV anchor, Shaukat Paracha, that his party was part of the PML-N government for the sake of constitution only. Any fight for the constitution was justified, he added.

"I and my party will not back any step by Prime Minister Nawaz Sharif against the constitution of the country," he maintained.

Earlier on August 9, Mehmood Achakzai came under fire for his comments in the National Assembly after Quetta Civil Hospital blast which killed over 70 people. He had termed the blast a failure of country's intelligence agencies.

"Our agencies can even find needles from the dirty water and now they should also do this job,” he said while urging the security institutions to unmask the preparators of Quetta blast. Our bureaucracy, today, was presenting new theories, merely holding RAW responsible for the attack was not enough, he added.

In an interview with Afghanistan Times, Achakzai said: "If Afghans are harassed in other parts of Pakistan, they should come here to the Pakhtunkhwa province, where no one can ask them for refugee cards because it also belongs to them,” while responding to a query about the deportation of Afghan refugees from Pakistan.

When asked if Pakistani Pashtuns were unhappy over the country’s decision to build gates at the Afghan border, the PK-MAP leader said that Torkham and forced repatriation of Afghan refugees are two separate issues and Pashtuns are concerned about the matters of Afghan refugees.

The statement had surfaced just a week after Pakistani and Afghan forces exchanged fire at Torkham border over the construction of a border crossing to bar unauthorized entry of Afghan nationals to Pakistan.