Pakistan's Prime Minister Imran Khan is quite active on his social media handles and recently he shared a Bollywood reference to show how his government had been targeted "from day one," amid the protest and unrest in the South Asian country.

Turning to his social media handle, a clip from the Indian film Inquilaab (1984) was posted which showed a political meeting where the members were busy hatching a plan to destabilise the government.

Accompanying the clip, the caption read: "It is what has been planned against the PTI govt from day one by the corrupt mafias". 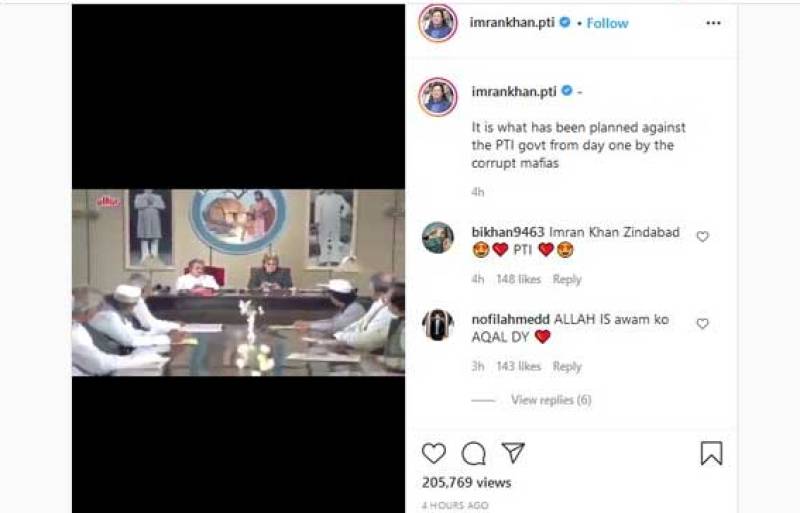 Later, the post was taken down by the premier for unknown reasons.

Bollywood actor Kader Khan can be spotted addressing the party workers who were tactfully plotting to overthrow the ruling government. "No where in the Geeta or Ramayana (religious texts) is it written that the government which has been in power for years should continue to remain. We, too, have every right to form a government, and we will do so no matter what!" he vows.

He says that for the plan to succeed, the party will have to "win the elections". And how will they go about doing so? "By winning the people's trust," he says, pausing to chuckle in a signature Bollywood villain fashion.

Further, he stresses that the public will have to be conditioned to believe that the government is "incompetent and dysfunctional" and for that"fear, restlessness and crime" rampant should prevail in every town and village of every province.

His associate then says that at this point, the party will "step out", "get on stage" and "bad mouth the government".

"We will then tell them that if there is someone who can save the people, it is us and a government under us."

Although Khan did not name any individual or group specifically, it is an apparent reference to the Opposition's Pakistan Democratic Movement – which has recently seen upheaval with the exit of two of 10 political parties. PDM chief Maulana Fazlur Rehman aims to put the country 'back on track' by removing the premier and his government from power.