Students stage demonstration in solidarity with Syria in Islamabad 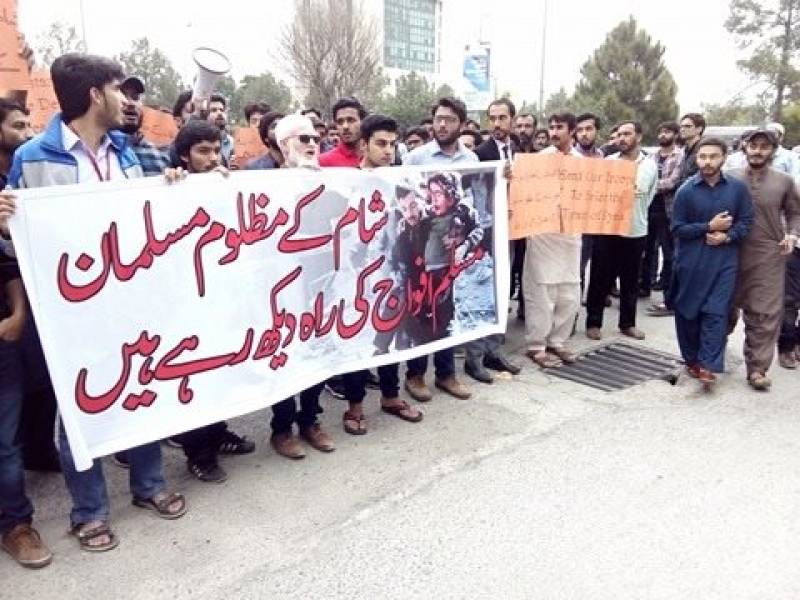 ISLAMABAD – Amid rising death toll in Syria, a large number of university students staged a demonstration in the capital city to raise voice against atrocities on Syrian people.

Besides students from different universities of Islamabad, people from all walks of life also participated in the rally, which called for the cessation of hostilities in Syria

Students demanded Pakistani government and Muslim leaders to do as much as possible for bringing peace in the war-stricken country.

The students chanted the slogans of ‘Save Syria’ and ‘Pakistan Stands with the Syrians’. The speakers invited the attention of public towards Syria by giving a briefing on the death toll, injuries and displacement of people both internally and externally in Syria. They demanded Pakistan government to use its diplomatic channels and play a vital role in extinguishing the flames. It is obligatory on Pakistan to act and raise its voice against the human rights’ violations in Syria. 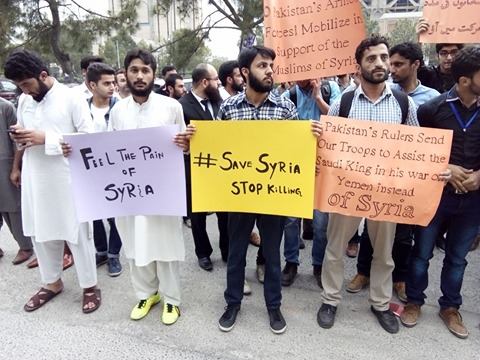 ‘The Government has done nothing and Syria remains largely ignored in our power corridors’, said one of the speakers. Another speaker added that as the powerful Islamic Republic with immense diplomatic resources, Pakistan must speak out loud against the violence but it seems nobody feels the pain or hears the cries of Syria. ‘An estimated 500,000 people have lost their lives in the past seven years but the Muslim world has taken little notice’, a student addressed the public.

The outrage at inaction is justified as Pakistani government has played no role in doing anything for Syria. The only Muslim Nuclear power with the sixth largest army in the world has long feared sectarian backlash and hence been repeating its ‘Neutrality’ mantra. We cannot sit back and be 'Neutral'. Our Foreign Policy doesn't demand to be neutral either. Neutrality loses all its meaning when hundreds of thousands of lives are lost. That does not mean Pakistan should make military intervention in Syria on behalf of any of the belligerents but Pakistan should at least put some efforts in alleviating the sufferings of the Syrian people.

Pakistan has been consistently abstaining from voting against Syrian Human Rights violation, be it New York or Geneva, fearing a sectarian backlash. However, Syrian Civil War is not sectarian in nature. Quite contrary to the ostensible picture, Syrian War is the proxy war between Iran and Saudi Arabia and it’s the war of control. This war is deeply rooted in Iran and Saudi Arabia’s regional hegemony ambitions that are driven by nationalism and not sectarianism.  Of course, along with it, Syria faces the threat of ISIS as well which different powers have been aligning with, to gain more control in power, unfortunately. Kurdish militias have led to Turkish intervention and now Syria is a total mess, a war that is so complex to understand.

In the 1980s, It was Pakistan along with Syria that played a key arbitrating role between Saudi backed coalition lead by Saddam Hussein and Tehran. In the 1990s, it was Pakistan, along with Turkey and Iran that went on to aid Bosnia against the odds and Pakistani military played a tremendous peace-keeping role in Bosnia. Pakistan has been keeping the Kashmir cause alive by regularly calling for the end of atrocities committed by Indian troops on the people of Kashmir but it looks like Pakistan is keen to throw its tremendous history of rising against human rights violations into the trash by adopting a criminal silence on Syria.

The students demanded all the Muslim countries to force cease-fire in Syria. They also criticized UN for not being serious about making peace. The superpowers are playing with the lives of Syrian Muslims for their own political ambitions and all the Muslims across the globe should unite and force their government to pressurize Saudi Arabia and Iran to cease fire and exit from Syria. This will help in implementing UN resolutions on Syria with efficacy.

The students also requested Pakistani Media to play its role in raising voice for the Syrian Muslims. ‘We must shape Public Opinion on Syria; our people must know what terrible time Syria is going through! Unfortunately, we have not been able to do it’, contended a student. The only source of getting news regarding Syria is the Social Media as Pakistan’s print and electronic media give little space to Syria in its bulletins. Journalists should come forward and take the initiative to put pressure on Government for using its diplomatic channels.

The demonstration ended with prayers for the protection of Syrian Muslims against all those forces that are harming them in any way. The protesters also recited Al-Fatiha for all those who have lost their lives in this bloody war. The silence must break. The war has ripped Syria apart and it will keep on adding insult to injury unless Muslim countries take action.