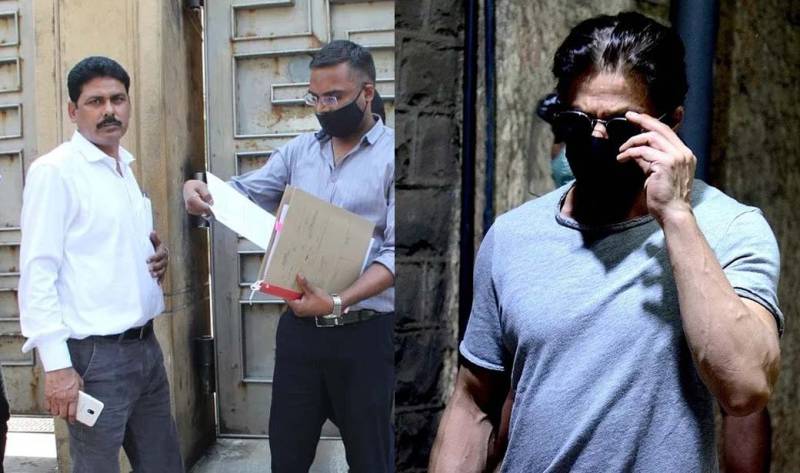 MUMBAI – In another shocking development in the cruise drug bust case, India's Narcotics Control Bureau has raided the residence of Bollywood superstar hours after he visited his son at a local jail in Mumbai.

The Indian central narcotics agency members were seen arriving at the gates of Shah Rukh and Gauri Khan's residence 'Mannat' in Mumbai.

Meanwhile, the DDLJ actor spoke with the son through the intercom under surveillance of jail authorities. Khan's visit to his son comes right after Maharashtra jails lifted COVID-induced restrictions around physical meetings.

The NCB raid was conducted by NCB officials after chat messages of Aryan Khan with an ‘upcoming Bollywood actress’ [which was not named by Indian media] was presented before a Mumbai court where officials claimed that the duo was discussing ‘drugs’.

On Wednesday, a Narcotic Drugs and Psychotropic Substances Court rejected the bail plea of young Khan along with co-accused. Meanwhile, the Bombay High Court scheduled the hearing for October 26.

In a major setback, Shah Rukh Khan’s son, Aryan Khan’s bail plea was rejected today by a court in Mumbai in ...

Earlier, the Indian drug agency officials told a court that the star kid was involved in the conspiracy, illicit drug trafficking as well as its consumption.

“During the initial investigation, some international linkages pertinent to this applicant have been unearthed, which prima facie indicates towards illicit drug procurement. The investigation requires sufficient time so as to approach the foreign agency concerned,” officials told the court.

Khan’s son has been in custody for around 3 weeks after he was detained during a raid at a rave party by the Narcotics Control Bureau (NCB) on October 3. During the hearing, the 23-year-old’s counsel informed the court says that no illegal substances were seized from him during the bust.

Aryan’s arrest in a drug case has triggered a debate that the BJP led government is harassing the son of India’s biggest Muslim actor due to his religion. The Indian agency has also faced heat from several groups. Activists questioned the presence of two people who participated in the cruise bust despite not being members of the drug agency. NCB officials are also alleged for taking up the case with mala fide intentions to frame specific individuals.

Indian Twitter has been wrecking a storm on the internet after the hashtag #BoycottShahRukhKhan started trending. The ...

Many came to support King Khan in the case as he mostly enjoyed a non-controversial film career however he faced the ire of the Modi-led incumbent set up for being a Muslim.

Khan was dubbed ‘anti-national’ by the Indian ruling party in 2015 after he spoke against growing religious intolerance in the 'populous democracy' in the world.