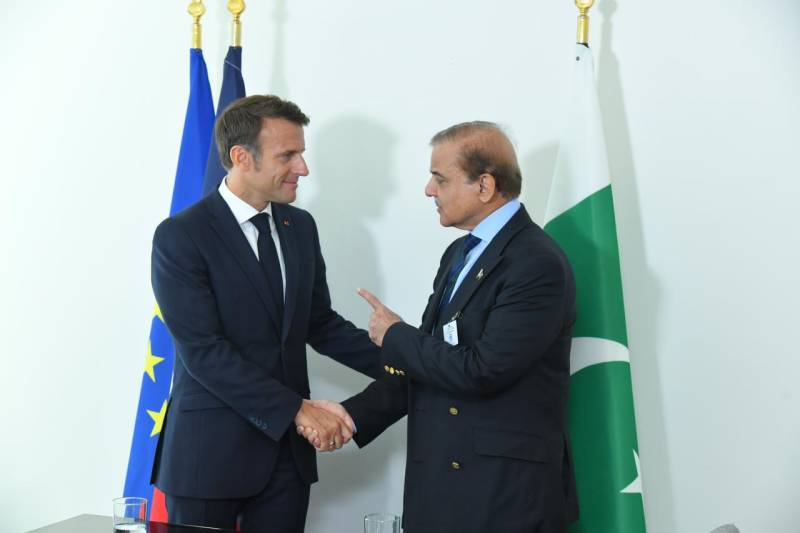 NEW YORK – France has pledged to host an international conference with a focus on highlighting the need for urgent assistance and mobilisation of resources to avert crisis after massive floods.

The development comes as Pakistani Prime Minister Shehbaz Sharif and French President Emmanuel Macron held a bilateral meeting on the sidelines of the 77th Session of the UN General Assembly (UNGA) in New York.

Both leaders exchanged views of views on improving bilateral ties and agreed on mobilising international support for South Asian nation to help recover and rebuild its economy on a sustainable footing after climate change-induced floods that wreak havoc across country.

Paris will also help Islamabad with climate-resilient reconstruction-related financing to fasten the transition to renewable energy, per the official statement.

During the meeting, PM Shehbaz reaffirmed the long-standing friendly relations with France and further stressed strengthening the bilateral relations across a range of areas, including trade and investment, energy, agriculture, IT, defence and security, and higher education.

The premier further commended Macron for support for the GSP+ scheme, noting that it served to enhance trade and economic ties with the European Union as well as France.

He also thanked the French president for his solidarity and support for the flood affectees and for sending timely assistance of aid.

Climate change was a potential area of cooperation between the two sides and for collective global action, PM said

Furthermore, the Pakistani PM also held bilateral meetings with the presidents of Iran, Spain and the Chancellor of Austria and attended the welcome reception hosted by the UN Secretary-General.

ISLAMABAD – Russia has reportedly expressed readiness to supply petrol to Pakistan on deferred payments, a move ...

Apart from Turkish President Recep Tayyip Erdogan, Shehbaz Sharif will also have a bilateral meeting with Iran's President Seyed Ibrahim Raisi. He will host a luncheon in honor of the President of Turkiye and his wife on Wednesday.