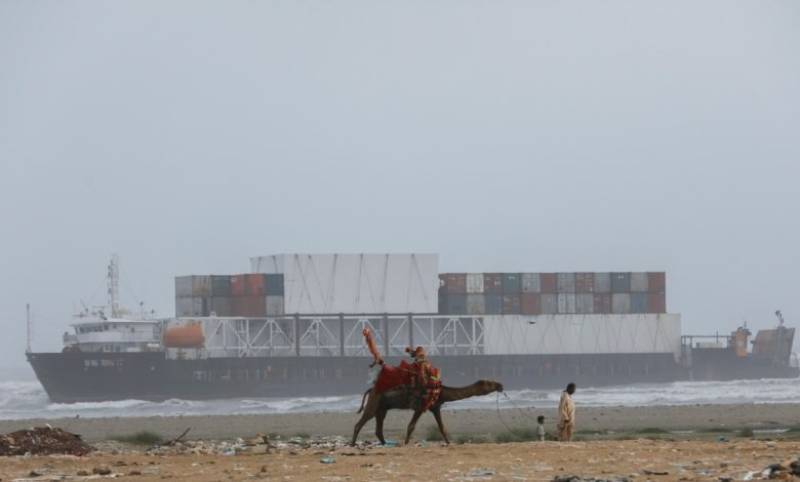 A cargo ship stuck at Karachi's Sea View early on Wednesday after it lost its anchors due to rough weather remained at the beach for second consecutive day as authorities have refused to free it.

According to the Karachi Port Trust (KPT), MV Heng Tong, a cargo ship coming from Shanghai was heading to Turkey, was anchored in Pakistan’s territorial waters for a crew change and it never entered in the KPT Harbor.

“Due to extreme rough weather, the vessel lost anchors and started drifting towards shallow waters in the early hours of the morning,” the port authority said in a series of tweets.

M.V. HENG TONG 77 was anchored in our territorial waters for a crew change.

It never entered or sailed in the KPT Harbor.

Due to extreme rough weather, the vessel lost anchors and started drifting towards shallow waters in the early hours of the morning.

The KPT then informed the Pakistan Maritime Security Agency (PSMA) which could not provide much help to it.

The harbour's navigation channel was not impacted by the ship, said the KPT.

It added, “Salvaging of the vessel is the responsibility of the Ship owner. All consequential marine & environmental damages will be on account of the owner”.

The KPT further said that operational and technical assistance is available to the owner of the ship.

The ship, which is 98 meters in length is owned by a Hong Kong-based company.

Several residents of Karachi have thronged to the Sea View after the news about the ship went viral.

CAIRO – The gigantic cargo ship known as the “Ever Given, stuck in the Suez Canal was finally set free on ...