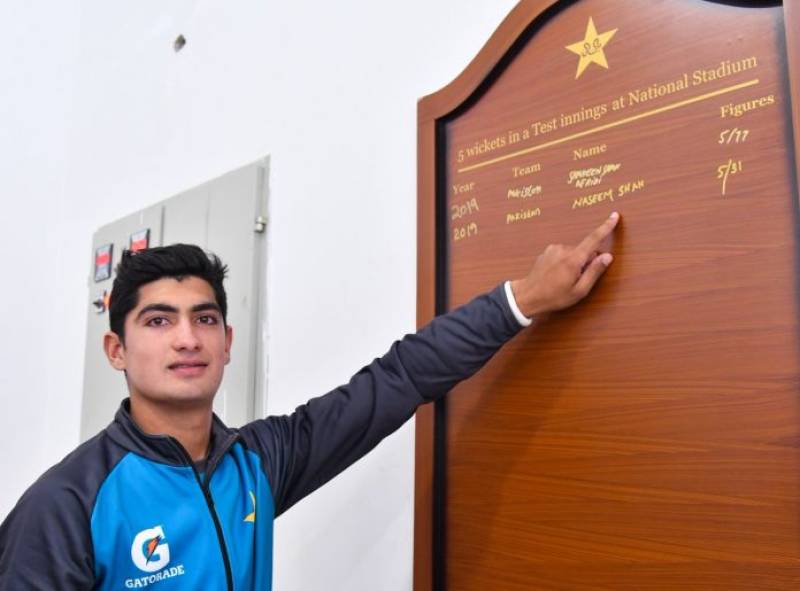 KARACHI – Naseem Shah became the youngest pacer to pick up a five-for in Tests as Pakistan registered a comprehensive 263-run victory against Sri Lanka in the second and final Test of the ICC Test Championship at National Stadium Karachi on Monday.

Pakistan had declared their second innings on Sunday at 555, giving the hosts a daunting task to chase 476 runs after recovering from an 80-run first innings trail. Pakistan’s first four batsmen had hammered tons in the second innings that included superb knocks from Abid Ali (174), Shan Masood (135), skipper Azhar Ali (118) and Babar Azam (unbeaten 100). It is only the second time in a Test innings that all the top four batsmen had scored centuries.

Sri Lankan batsmen, who on the last day of the match, resumed their innings from their overnight total of 212/7 remained unable to add to their score on the 14-minute and 16-ball stay at the crease. Naseem Shah, who was pick of the bowlers on Sunday after claiming three wickets, once again looked in full rhythm, bowling at perfect line and length to add two more scalps to his tally to finish with five for 3 in his 12.5 overs. Yasir Shah took two wickets, while Shaheen Shah Afridi, Mohammad Abbas and Haris Sohail captured one wicket apiece.

🗓️ December 2019: Picks up five wickets in Karachi, giving 🇵🇰 victory in their first Test series at home in 10 years.

What a turnaround from the young Naseem Shah 🙌 pic.twitter.com/rTa2bh8lHB

Naseem’s feat made him the youngest pacer and overall second youngest bowler to pick up five-wicket haul in an innings of a Test match. His accomplishment came at an age of 16 years and 307 days. Pakistan’s slow left-arm bowler, Nasim-ul-Ghani is at the top of the list of youngest bowlers to take five wickets in a Test innings. He was 16 years and 303 days when he took five wickets for 116 against West Indies at Georgetown in 1958.

The win, which is also Pakistan’s first series triumph against Sri Lanka at home since 1992 saw them occupying third slot in the World Test Championship table. They accumulated 80 points in the series, 60 from Karachi’s win and 20 from the drawn Test at Rawalpindi. India with 360 points are at the top, while Australia with 216 points are at number two position.

The final of the Championship will take place in June 2021 wherein top two sides out of the total nine will vie for top honours.

KARACHI - Pakistan bagged a historic victory against Sri Lanka by 263 runs, taking the series 1-0, in the second and ...

Pakistan captain while speaking at the presentation ceremony thanked Sri Lanka for visiting Pakistan. “Special thanks to Sri Lanka from the bottom of our hearts. They’ve given us immense happiness by playing in Pakistan,” he said.

He said 2019 had been a tough year in Test cricket for Pakistan adding that return of Test cricket to Pakistan was momentous. Hailing fast bowlers’s performance he said. “Special effort from the pacers to have brought us back after 191 all-out. The stand between Abid Ali and Shan Masood took the game away from Sri Lanka, can’t emphasize that enough.”

About his own century he said runs were long overdue on him. “I hope I can carry on from here. There is a big advantage to be playing at home. We can take confidence from our performances here and take them overseas when we travel.”

Sri Lankan captain Dimuth Karunaratene said that his side dominated the first two days but Pakistan batted really well in the second innings. “They put pressure back on us and outplayed us. We couldn’t build pressure with the ball after taking a lead of 80. They (Pakistan) scored too freely. Oshada, Dhananjaya and Kumara were the takeaways from the series. The security we were given was outstanding and we’d love to come back and play here.”

Man-of-the-match and the man-of-the-series said that all the hard work at domestic level had been rewarded. “A home Test series after ten years could not have been more proud. I keep working hard, keep believing in myself and remained positive.”

He said that there was pressure but Pakistan team remained positive in its approach with the help from the team management. “Thanks to the crowd that turned up to support us.”