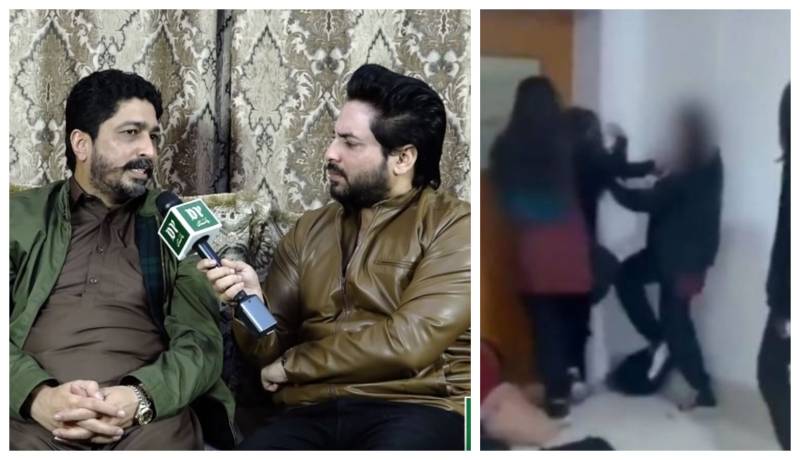 LAHORE – The father of a girl, who was tortured by her fellow students at an elite school in the provincial capital last week, has shared shocking details of the inhumane incident.

In an interview with Daily Pakistan, Imran said his daughter, Aleeha, was a student of eighth grade who was beaten up by a group of 12th graders for up to 45 minutes at the cafeteria of the educational institution. He blew the lid off the circumstances that led to the incident.

He said that Aleeha and her class fellow, Jannat Malik, were friends and the latter used to meet seniors at the school.  “One day, Jannat’s father asked Aleeha about reasons for poor performance of his daughter in the class and she informed him about her suspicious activities,” he said, adding that Jannat’s father then asked Aleeha to provide him some evidence.

“My daughter took photos when she was meeting her senior fellows and shared these with Jannat’s father who later scolded his daughter,” the victim’s father said. However, Jannat was later told by her father that he got photos from her friend Aleeha.

Following the incident, the group of senior students – Omaima, Noor, Hanan Jatoi, Abdul Hanan, Sameed and another girl – overpowered his daughter in the cafeteria and brutally tortured her. They filmed the incident and “I got to know about it when I saw it in a WhatsApp group. I was in Islamabad at that time,” Aleeha’s father added.

“I immediately returned to Lahore and contacted the police, but they were reluctant to register the FIR of the incident,” he said. When he went to meet ASP Sidra, he said, she asked him not to lodge the case. Imran said he was not satisfied with the FIR registered by the police as relevant sections were not included in it.

He said all senior students of the group belonged to influential families, adding that he was receiving threats from Hanan and another suspect involved in the case. The names of the male suspects and the school were not included in the FIR by the police, he said.

Sharing shocking details about the school, he said smoking was common, alleging that some students used drugs inside the educational institution.  “I was informed by the cleaning staff of the school that they found several buds of cigarettes and white-coloured substance in classrooms,” he revealed.

“My daughter also told me that previously seniors were not allowed to enter the junior sections but the restriction was flouted when the principal was replaced,” he said, adding that adults used abusive and vulgar language in the school.

“I have decided to change my daughter’s school but I am waiting for her final exams,” Imran said.

“Once I managed to enter a Qawwali event at the school and saw girls and boys dancing together with no restriction from the school administration,” he recalled.

He said the principal of the school misbehaved his wife and other family members when they went there to lodge a complaint. “The principal said no one would register your FIR. Go and do whatever you can do,” the principal said, according to Aleeha’s father. He responded harshly when he was asked to take action.

He said one of the suspects used to bring pistol with him to school and threatened his school fellows, but no action was taken against him by the administration.

Saying it seems influential people are above the law, he urged the IG Punjab to take up the matter.