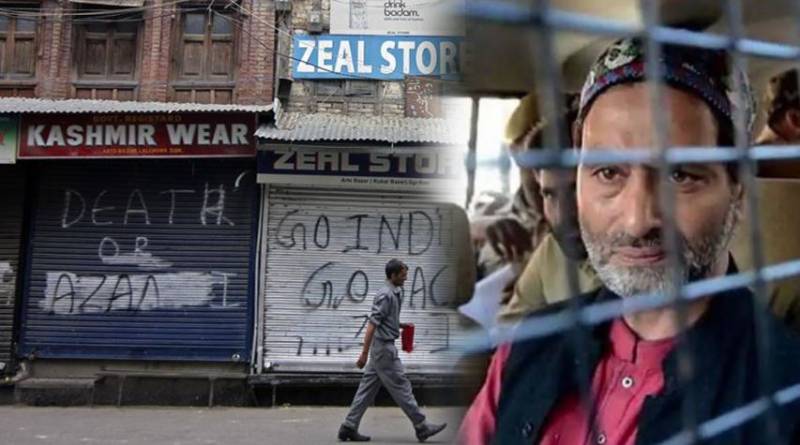 SRINAGAR – All Parties Hurriyat Conference has called for a complete shutdown in Indian occupied Kashmir on Tuesday against the sham conviction of illegally detained Kashmiri leader Yasin Malik in a false case by an Indian court.

Last week, an Indian court convicted the noted Kashmiri leader in a ‘terrorism-related’ case that carries a maximum sentence of the death penalty or life imprisonment.

The court also formally framed the charges against other Hurriyat leaders, including Masarrat Aalam Butt, Shabbir Shah, and others.

APHC spokesman strongly condemned the conviction of Jammu and Kashmir Liberation Front Chairman Yasin Malik on concocted and politically motivated charges and appealed to the international community, especially the United Nations and the Organization of Islamic Cooperation, to play their role in saving the life of ailing Kashmiri pro-freedom leader.

APHC slammed Modi-led fascist Indian government for its hegemonic behaviour that left behind all the past measures of suppression to curb the just and legitimate struggle of the people of occupied Jammu and Kashmir.

ISLAMABAD – Pakistan has summoned Indian Charge d’ Affaires who was handed over a demarche over framing of ...

Yasin Malik’s wife, Mashal Malik, also called on the international community to intervene and stop the Modi-led government from convicting the Kashmiri leader.

The Pakistani government also condemned the conviction of Kashmiri leader Yasin Malik and urged Indian authorities to stop the victimisation of the true representatives of the Kashmiris.