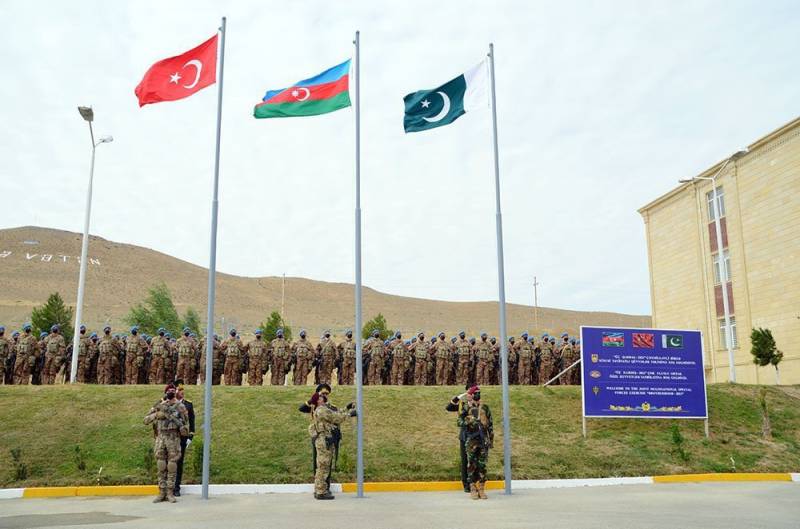 The gathering witnessed the ending of joint training that included live-firing, the use of Kamikaze drones, helicopters, and small arms. In addition sea assault, fast rope, and close interdiction by Azerbaijani Air Force and Air Defence were also demonstrated during the drill.

Pakistan’s DG Security and Counter-Terrorism of the Armed Forces Major General Mumtaz Hussain addressing the closing ceremony said “It is a great honor and pride for me to witness the joint exercises between the Special Forces of Azerbaijan, Turkey, and Pakistan, standing shoulder to shoulder”.

Commending the professionalism demonstrated by the special forces during the training, he said the goals set for the implementation of the military drill have been achieved.

Other dignitaries also wished the participants success in their further service, as well as presented commemorative gifts.

RAWALPINDI – Opening ceremony of the exercise, Peace Mission-2021, under the ambit of Shanghai Cooperation ...

On the other hand, the opening ceremony of the exercise ‘Peace Mission’ under the ambit of the Shanghai Cooperation Organisation platform was held at the Donguz training area in Russia.

Troops from all SCO member states – Pakistan, Russia, India, Kazakhstan, China, Kyrgyzstan, Tajikistan, and Uzbekistan – are participating in the exercise under an extremely challenging field environment. Belarus is taking part in the exercise as an observer.