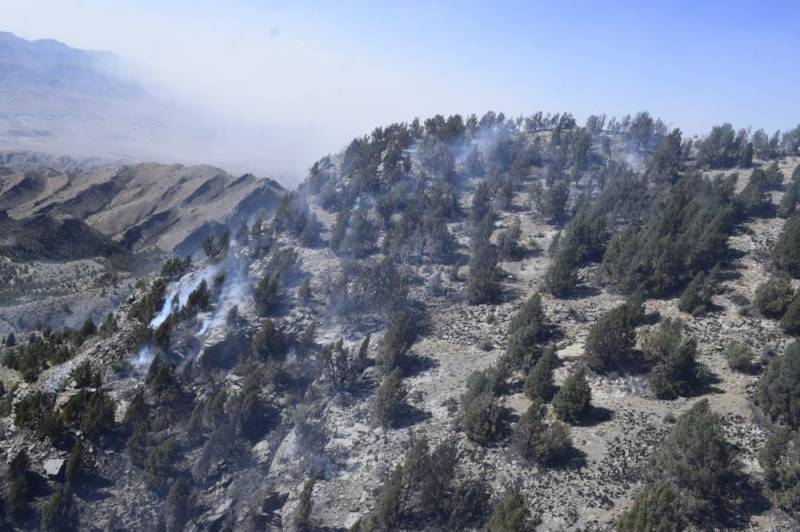 QUETTA – The massive inferno in the pine nuts forest in the Sherani district of Balochistan, which was raging for nearly two weeks, was reportedly doused with the help of Iran’s mammoth air tanker.

Balochistan government made the announcement to extinguish the fire with the help of Iranian authorities that provided Ilyushin Il-76 air tanker to fight the massive blaze.

Bizenjo also hailed the Iranian authorities for providing a firefighter aircraft which played an important role in extinguishing the fire. He added that steps will be taken for the rehabilitation of the affected forest while conservation of forests and wildlife will also be ensured.

The Iranian Ilyushin Il-76 air tanker has also been used to control several forest fires in Georgia, Armenia, and Turkey. The four-engine turbofan strategic air lifter can launch up to 40 tons of water in the air.

Reports suggest that the jet took off from Noor Khan Air Base to extinguish the forest fires in the Sherani district.

Earlier, firefighters from the provincial and national disaster management authorities tried to stop the ablaze, using rescue vehicles and firefighting equipment, but all efforts remained ineffective.

Pakistan Army also established a base camp in the area and provided two helicopters to assist in the firefighting operation. Frontier Corps and Levies personnel also participated in relief and rescue operations.

At least three people have been killed and nearly five others sustained injuries in forest fire while thousands of growers lost their only source of income as the hilly area is home to the world’s largest pine forest.

PESHAWAR – In the wake of a massive forest fire in the Koh-e-Suleman mountain range, the Khyber-Pakhtunkhwa (K-P) ...

Sherani Forest Officer told a local media outlet that nearly 2 million trees have been burned to ashes to date.

KARACHI – Iran is sending its Ilyushin Il-76 air tanker to help put out fires that have been raging for almost ...