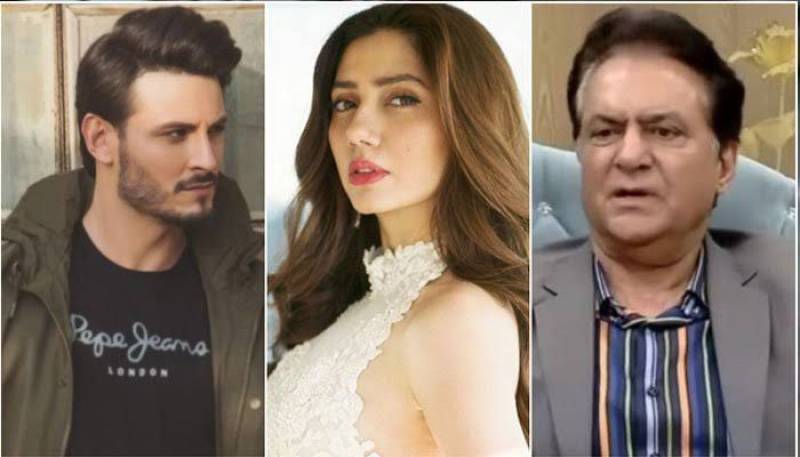 The internet was left in a frenzy when veteran actor Firdous Jamal’s age-shaming comment about superstar Mahira Khan became the talk of the town.

From age-shaming to banning the legendary actor, the Mahira Khan-Firdous Jamal fiasco quickly became a topic that triggered an impromptu debate.

Recently, Jamal was invited to MYK News TV Comedy Programme Woh Wala Show and some of his explosive statements came under the public scrutiny.

During the show, Firdous Jamal shed light on his statement regarding the Humsafar actor not fitting the criteria of a heroine. He stated that Mahira Khan should do character roles and should rather adopt characterisation.

Elaborating his stance, the actor said when one thinks of a heroine it equates to an innocent youthful girl. Khan is no longer in that age group to portray ‘heroine’ roles.

Furthermore, he explained that by characterisation he isn't implying that Mahira should do ‘ama’ and ‘dadi’ roles. Rather she should opt for a wife’s or a sister’s character.

Commenting on Mawra Hocane, Firdous said that he hasn’t seen any of her dramas.

Further, the senior actor had a lot to say after the host reminded him that the Sabaat star had tweeted against him earlier:

Sharing his views on Chupke Chupke actor Osman Khalid Butt, the 67-year-old veteran asked the anchor, “who is he?”.

Later, he added, “I must have seen him once or twice. He is son of Khalid Saeed Butt who wasn’t an actor. Then how could he be an actor? Khalid was a DG at PNCA. He was a very nice man but he was a bad actor. He tried to test his luck as an actor when he was in Govt College.”