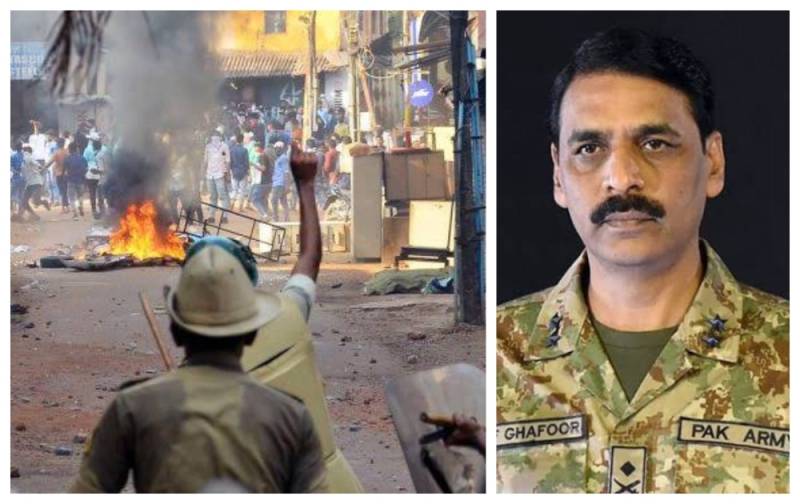 Ghafoor, who is Director General of Inter-Service Public Relations (ISPR), took to Twitter to say that the voices of Kashmiris who have been suffering at the hands of Indian forces are resonating now through over 200 million Muslims and minorities in India.

Indian efforts to silent innocent Kashmiris in IOJ&K by keeping them under brutal siege coupled with communication blackout have failed. Their voices now resonate all across India through over 200 million Muslims & minorities.#KashmirIsPakistan#IndiansAgainstCAB#BeginningOfEnd pic.twitter.com/2FDERQJGmq

He also shared a video from Indian streets, where a huge number of people are seen rallying against the controversial Citizens Amendment Act (CAA).

In his previous tweet, while wishing happy birthday to the founding father of the Nation Quaid-i-Azam Mohammad Ali Jinnah, the DG-ISPR also referred to the plight of the Muslims at the hands of the extremists Hindus.

“Those who opposed then are realizing now. For them it is a beginning afresh now and it is beginning of the end,” his tweet read.

NEW DELHI – The Indian police and security forces have stepped up security to stop the massive protest marches ...

There have been widespread protests in India against the law. The Citizenship Amendment Act (CAA) is perceived as being discriminatory to the country’s Muslim minority, as it gives non-Muslim minorities from Afghanistan, Bangladesh and Pakistan who fled to India before 2015 a pathway to citizenship which Muslims in the same position do not have.

It is understood that undocumented Hindus and other religious groups can gain citizenship if they can show that they were persecuted for their faith in the neighbouring Muslim-majority countries.

There are up to 25 deaths so far in almost two weeks of demonstrations and violence, with most reported in the northern state of Uttar Pradesh, which has a population of 204 million, 20 per cent of whom are Muslims.

India has the world’s largest Muslim minority population, which estimates put at approximately 14 per cent of the overall population.

BEIJING – The Chinese Embassy in India has issued a travel advisory for its citizens asking them to take ...