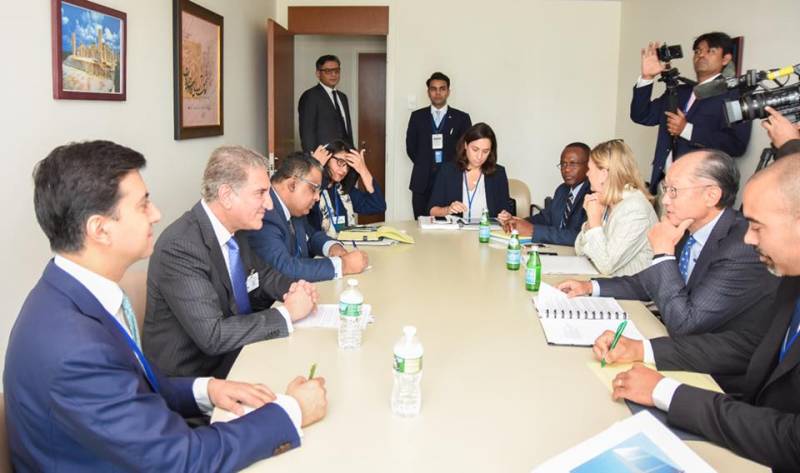 NEW YORK - Foreign Minister Makhdoom Shah Mahmood Qureshi held a meeting with President of the World Bank, Jim Yong Kim on the sidelines of the 73rd UNGA session on Monday.

The meeting was centred around World Bank’s role in the implementation of the Indus Water Treaty (IWT) as its Administrator.

According to a communique, the Foreign Minister presented Pakistan’s position on the Kishan Ganga and Ratle projects in a forceful and emphatic manner, saying the Indian construction of these projects represented a violation of the Treaty, which gave Pakistan exclusive rights to western rivers.

'The procedural delay on Pakistan’s request to the World Bank to empanel the Court of Arbitration had resulted in the completion of the Kishan Ganga Projects while construction work on Ratle was in progress,' emphasized the minister.

Qureshi said the new government viewed this as a humanitarian issue endangering the lives and livelihood of millions while hastening to add that the incumbent regime was not interested in politicizing the issue.

On the other hand, the President of the World bank said he understood Pakistan’s position on the Treaty, expressing the Bank’s desire to play a constructive role in resolving this important matter at the earliest.

'With the ongoing challenge of climate change, water issues were likely to be more prominent on the international agenda,' said the World Bank president.

Kim indicated that the World Bank was in the process of finalizing a fresh initiative and would soon be approaching Pakistan and India with details.

The interaction was conducted in a cordial and frank atmosphere as both the sides resolved to maintain regular contacts at various levels to seek an early and amicable settlement to the issue.