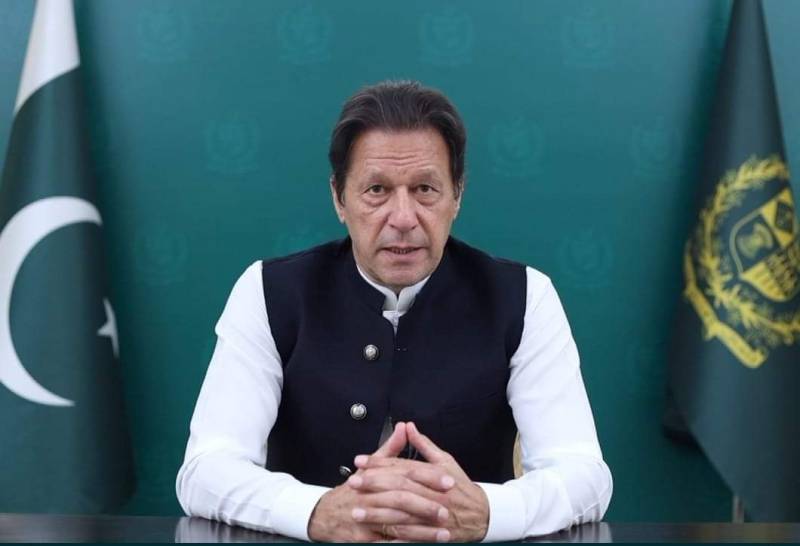 NEW YORK – Prime Minister Imran Khan Friday called for efforts to stabilize the new Afghan setup as it is the only way forward for regional peace.

In a prerecorded speech at the 76th session of the United Nations General Assembly (UNGA), the premier urged the UN to mobilize the international community to play a crucial role in the betterment of Afghan nationals. If the world community incentivizes the Taliban government and encourages them to walk this talk, it will be a win-win situation for everyone, he said.

Khan, who struck a positive tone about Taliban rule, said their leaders pledged an inclusive government besides not allowing terrorists on Afghan soil. He also warned that taking a course contrary to this would further destabilize the war-raked country and turn it into a terrorists’ haven.

PM mentioned the current time as a critical time saying around half the people of Afghanistan are already vulnerable, and by next year almost ninety percent of the people in Afghanistan will go below the poverty line.

He touched on a range of topics including rising Islamophobia, climate change, other than the plunder of the developing world by their corrupt elites.

Pakistan has consistently called for recognition of the new government in Afghanistan, he said while adding that we always emphasized assistance for averting the alarming humanitarian crisis in the neighboring country, and resumption of development aid for the new setup for preventing an imminent economic collapse there.

Khan also mentioned that many politicians in the United States blamed Pakistan for the turn of events in the region. “The country that suffered the most, apart from Afghanistan, was Pakistan when we joined the US war on terror after 9/11,” he added.

He reiterated that around 80,000 Pakistanis died, $150 billion dollars were lost to our economy, and there were 3.5 million internally displaced Pakistanis.

Adding that “there are three million Afghan refugees still in Pakistan, and the only reason Pakistan suffered so much was that it became an ally of the US in the war in Afghanistan”.

The world needs to know why the Taliban recaptured Afghanistan, saying a military solution is where the US went wrong, and if today, all the world has to do is to do a deep analysis of why a 300,000 well-equipped Afghan army surrendered without retaliating.

Highlighting the war crime and crime against humanity in IOK, PM said we have unveiled a dossier on gross and systematic violations of human rights by the Indian security forces in Occupied Jammu and Kashmir.

The inhumane suppression is accompanied by illegal efforts to change the demographic structure of the occupied territory, as the incumbent authorities planned it to change it from a Muslim majority into a Muslim minority.

Khan mentioned that the actions of the Modi-led BJP government violated the resolutions of the UN Security Council on Jammu and Kashmir. The resolutions clearly prescribe that the ‘final disposition of the disputed territory should be decided by its people, through a free and impartial plebiscite held under the UN auspices, he added.

He termed as unfortunate, very unfortunate, that the world’s approach to violations of human rights lacks even-handedness, and even is selective. Narrating the nefarious agenda of RSS-BJP, PM said they are being allowed to get away with human rights abuses with complete impunity. Khan mentioned the Indian barbarism as it snatched the mortal remains of the great Kashmiri leader Syed Ali Shah Geelani, from his family, denying him a proper Islamic funeral and burial, in accordance with his wishes and traditions.

Besides Kashmir and Afghanistan on agenda, PM also highlighted the world’s attention to the challenges of Covid-19, including economic crisis in the developing nations. Formulating a comprehensive strategy that assures vaccine equity, is the need of the hour, he said while adding that alleviating poverty, jobs creation, building sustainable infrastructure, and bridge the digital divide should be in focus to support the needing countries.

PM also called on the UN chief to convene a summit in 2025 to review and accelerate the implementation of Sustainable Development Goals (SDGs).

ISLAMABAD – Prime Minister Imran Khan Tuesday cautioned that Afghanistan could descend into a civil war if the ...