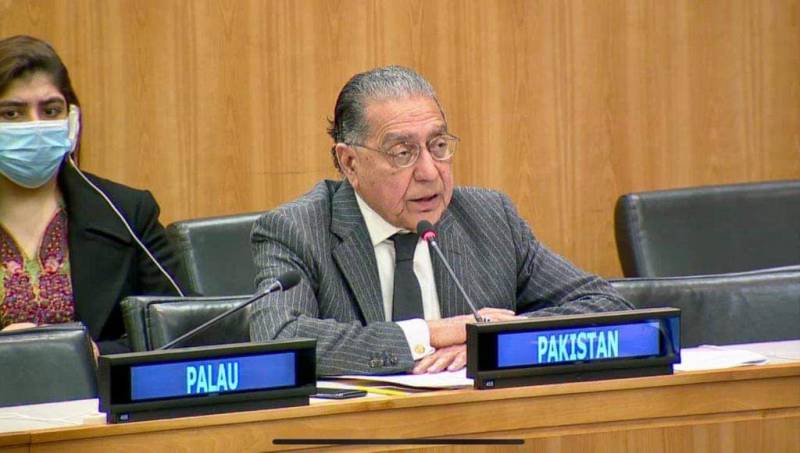 He stated this in his remarks during the 55th Session of the Commission on Population and Development which was held under the Theme "Population and sustainable development, in particular sustained and inclusive economic growth."

“Emergency humanitarian and economic support is essential in situations such as in Afghanistan as well as for the people of occupied Palestine and Jammu and Kashmir,” he asserted.

There is an intimate link between population and sustainable development; after all, development is by the people and for the people.

Munir Akram further said that "Understanding population dynamics is essential as societies around the world strive to achieve the ambitious and holistic 2030 Sustainable Development Goals.

An educated, skilled healthy and empowered population is the key driver of development; a people which is ignorant and uneducated and enfeebled by disease and unemployment is a drag on development and a recipe for persistent and growing poverty.

For developing countries, a first priority is poverty reduction, especially in crisis and conflict situations.

The developing countries have been devastated in the last 2 years by the Covid-19 pandemic and natural and man-made disasters, and price inflation in food, energy and other essential commodities. They deserve the mobilization of adequate finance to respond to these multiple exogenous shocks to their economies and people.

“We endorse the call by the Secretary-General, and in the FfD Declaration, for larger concessional assistance, debt relief, re-allocation of unutilized SDRs, larger financing from the IMF and MDRs and regional banks, and mobilization of the promised $100 billion annually in climate finance, to enable developing countries to recover from these crises and revive their economies,” read the statement.

One, a priority focus on human development, with adequate spending on quality education and health, especially the empowerment of women and youth in development.

Four, reform of the world trade regime to allow developing countries preferential and full access to global markets for goods and services to enable export-led growth;

Five, overcoming the growing digital divide between the industrial and developing countries;

Six, halting and reversing the outflow of billions each year in illicit financial flows from developing countries."