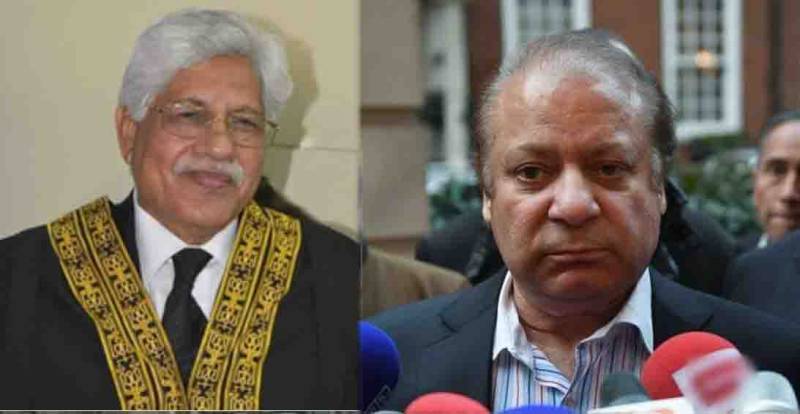 LONDON – Former top judge of Gilgit-Baltistan Rana Shamim had "signed his affidavit in the presence of deposed Pakistani PM Nawaz Sharif in London", according to a report published in a leading daily.

The report quoting sources said British solicitor Charles Guthrie confirmed that Shamim, who is now facing a contempt case in IHC, "took the oath and signed an affidavit in Sharif’s office as he tried to incriminate former Chief Justice Saqib Nisar and honourable sitting judges of Islamabad High Court".

Charles Guthrie confirmed that the ‘Judge Guy’ was at ‘Marble Arch’, Stanhope Place. Marble Arch was listed on Companies House records as one of the offices of Flagship Developments Limited, of which Sharif’s son is one of the directors, per the report.

Stanhope House is where Sharifs held meetings. He reportedly appeared at the same premises in the last press conference before leaving for the South Asian country and surrendering himself to the authorities.

Federal Minister for Information Fawad Chaudhry reacted to the news report that twisted the existing facts in the affidavit case, saying it had emerged that Rana Shamim, former chief judge of Gilgit-Baltistan (GB), had signed his ‘affidavit’ in the presence of former PM Nawaz Sharif in London.

Lambasting the London-based PML-N leader, he said it had been established why the former prime minister and his family were called the Sicilian mafia by the Supreme Court (SC) in its remarks during the Panama leaks hearing against him.

Shamim’s three-year-old affidavit sparked a new controversy in which he mentioned an alleged incident saying then CJP Saqib Nisar tried to coerce a judgement from a sitting Islamabad High Court judge against the deposed PM and his daughter.

Meanwhile, a former GB judge never responded to queries about his meeting with the PML-N supremo.

On the other hand, the original affidavit was submitted a month after it allegedly surfaced. Shamim earlier told the IHC that he did not provide a copy or affidavit to the journalist who published the story and his affidavit was in a locker in London.