Indian jets tried to violate Pakistani airspace in Lahore-Sialkot and Bahawalpur sectors before being chased out: DG ISPR 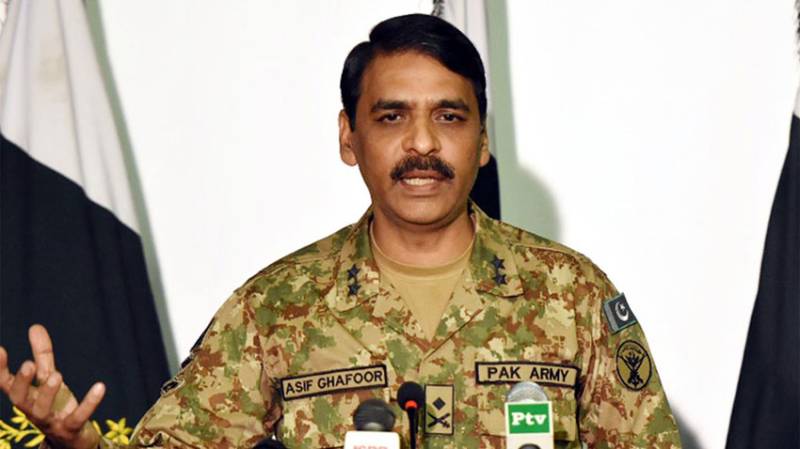 RAWALPINDI – Maj Gen Asif Ghafoor, the director general (DG) of Inter-Services Public Relations (ISPR) on Tuesday evening debunked India's claims on the Line of Control (LoC) violation earlier in the day, with a warning to the eastern neighbor of a befitting and surprise response soon.

“After radar warning, first challenge took place near the Lahore-Sialkot sector, 2nd near Bahawalpur sector and 3rd near Muzzafarabad. All three were challenged," the DG ISPR added.

Ghafoor started with a presentation, debunking claims made by India that the country's air force had "struck the biggest training camp of Jaish-e-Mohammad (JeM) in Balakot". "They are claiming that they remained in the Pakistani airspace for 21 minutes and killed 350 terrorists. They claim that the second strike was in Muzaffarabad and the third in Chakothi.

"Not even a single brick or debris is present there. They are claiming 350 deaths. Even had there been 10 casualties, there would be blood, funeral prayers, injuries," the spokesperson said.

"We will respond differently and we will surprise you (India)," warned the Pakistan Army spokesperson.

Indian military planes had violated the LoC early on Tuesday, intruding from the Muzaffarabad sector, following which "Pakistan Air Force immediately scrambled" and Indian aircraft went back, the ISPR DG had earlier shared via Twitter.

At the presser, the army spokesperson said that the Indian forces flew away after dropping a payload of four bombs inside Pakistani territory.

"The Indian forces wanted to target the civilian areas," he said.

"Today, the prime minister has asked everyone to get ready for every eventuality. We are all ready. Now it is time for India to wait for our response," he asserted.

"The response will come at a point and time of our choosing where our civil military leadership decides, and as a matter of fact, has decided," he added, reiterating the statement issued after the National Security Committee (NSC) meeting convened by Prime Minister Imran Khan.

ISLAMABAD – A meeting of the National Security Council (NSC) with top civil and military leadership in attendance ...

"We have already exposed India and will do it again so the world knows what exactly India wants. "

Referring to Indian media's claims that "350 terrorists have been killed and a hideout has been destroyed", Maj Gen Ghafoor said: "I called you [journalists] so I could take you there [to the site] and show you on the ground reality but unfortunately, I cannot take you by air due to rough weather.

"But the local media is there and have shown that there was not even a single brick there. They are claiming that they killed 350 terrorists; I say even if they had killed 10, what about their bodies, their funerals, their blood [...] the spot is open for anybody and everybody: for ambassadors, defence attaches, UN military observer group in Pakistan.

"Even the civilian population or army representatives from India can come through the authorised entry points in Pakistan. See it for yourself and go back and tell your prime minister," offered the spokesperson.

"A lie has no feet to stand on. You saw their first 'surgical strike'. I told them [India] that you will never be able to surprise us. We have not been surprised. We were ready, we responded.

"I said that we will surprise you. Wait for that surprise. I said that our response will be different. The response will come differently. We are a democracy. You have proved that you are not a democracy. You have chosen a path of war without knowing the consequence for the peace and stability of the region. We have fought for 50 years for this peace.

"There is a joint session of the parliament tomorrow and then the prime minister has summoned a meeting of the National Command Authority [country's top nuclear body]. I hope you know what the NCA means and what it constitutes."

When asked if Pakistan's response would be in military terms or diplomatic, the ISPR DG said: "Whenever a country responds, it does so in all domains."

When asked if India's claim of 350 casualties has been backed by any another country, the army spokesperson questioned whether India itself had "shown anything or backed the claim". "The clip that they are showing is the one that has existed on YouTube for 2-3 years," he said.

To the question that why Pakistan did not resort to a similar action and intruded into Indian territory, the ISPR chief said he wished they had remained in Pakistan for some more time. "Had India taken the decision to attack military targets, it could have done so from a stand-off distance too. It could have aimed without crossing the LoC. Their target was just to take a dry run.

Analysts are also of the view that Pakistan acted maturely as the faceoff between the air forces of the two countries would have only resulted in further escalation and heavy loss.

After India resorted to an alleged airstrike in Kashmir region, the Pakistani people are demanding the government and armed forces to take action against India.