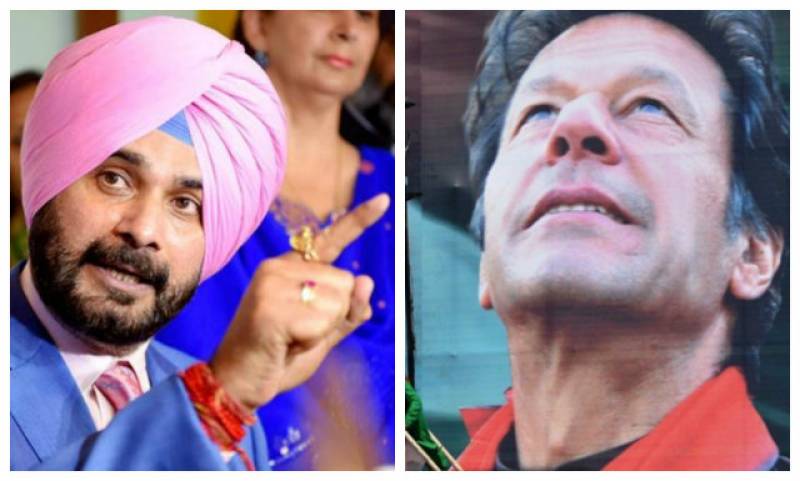 NEW DELHI - Former Indian cricketer Navjot Singh Siddhu has applauded Pakistan's Prime Minister-elect Imran Khan for being an eminent leader who always focuses on brotherhood and well-being of both the South Asian neighbours.

“Being a virtuoso at whatever he does, he knows how to lead his team with keeping his agenda alive,” Sidhu said while talking to an Indian TV channel. “He is a pure soul.”

Sidhu, who currently serves as the Minister of Local Government, Tourism, Cultural Affairs, and Museums of the Indian State of Punjab, called himself a huge fan of Imran Khan for not just being an extraordinary cricketer but for also his ideologies and leadership qualities that are now being praised throughout the globe.

“Imran’s best quality is that he leads from the front, he is the one who stands in front of hardships and say that I will confront them first.

“He will not let anyone become a scapegoat for his gain”, said the 54-year-old cricketer-turned-politician.

“Imran Khan is here to contribute to the system instead of grabbing the PM seat just for the sake of power and authority. He will bring out the economy from dark shadows and would think for the welfare of its people," he further said.

“I have seen him play what I witnessed in him is that he has the ability to change his weaknesses into his greatest strengths. He is by far the most hardworking cricketer that I have ever met.”

“People of Pakistan have tried and tested all other political parties, Left disappointed they have now joined all their hopes with Kaptaan. He has a magnetic spark in him like Trudeau“.

“You rate the ability in men by what they finish not by what they attempt. He started from scratch and today he is about to become the Prime Minister of Pakistan!”

Sidhu also hoped that Indo-Pak relations will certainly witness good, bright days under Imran's premiership. “He can prove to be good news for India. I have full hope and faith in him. I believe that he will become a uniting force rather than a divisive one.”

ISLAMABAD - The electoral commission on Friday finally released the complete results of elections for National Assembly ...

According to unofficial results announced by the Election Commission of Pakistan (ECP) on Saturday, Pakistan Tehreek-e-Insaf (PTI) has emerged victorious in Wednesday’s polls by winning 115 of the 270 National Assembly seats. Meanwhile, the Pakistan Muslim League – Nawaz (PML-N) and Pakistan People’s Party (PPP) have bagged 64 and 43 seats respectively.

At least 12,570 candidates contested for 577 provincial and 272 national assemblies in Wednesday’s polls. Other than the independent candidates, there are as many as 106 political parties whose candidates faced off others in their respective constituencies.