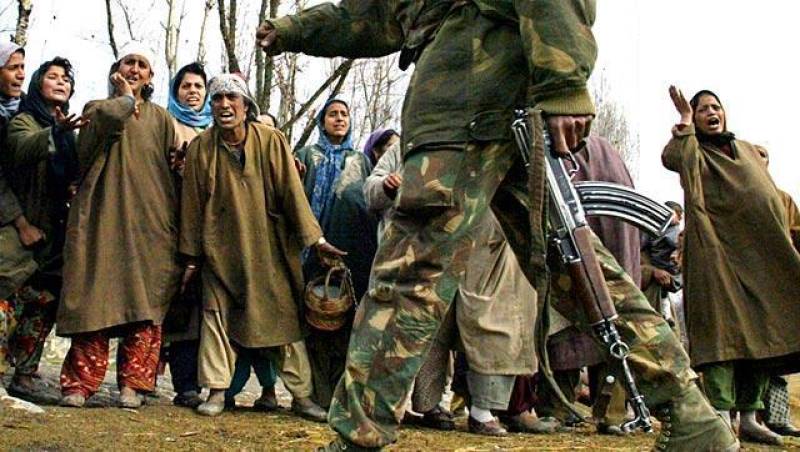 SRINAGAR – As many as six Kashmiri youth embraced martyrdom on Saturday as a result of atrocities by Occupation forces of India, the local media said.

According to Kashmir Media Service, the troops killed the youngsters during a cordon and search operation in Naranag area of the Ganderbal district and Batote area of Ramban district. The operation continued till last reports came in.

The troops have also launched similar operations in Doda districts of Jammu region.

PM Imran, in an address to the United Nations General Assembly on Friday, warned there would be a bloodbath once India lifts its restrictions in occupied Kashmir which have been in force since it revoked the region’s decades-old autonomy in August and detained thousands of people.

Soon after the speech, hundreds of Kashmiris came out of their homes, shouting slogans in support of PM Imran late on Friday night and calling for the independence of Kashmir, the Reuters reported.

On Saturday, police vans fitted with speakers made public announcements in some parts of Srinagar about movement restrictions, while additional troops were deployed to prevent any protests, according to officials and two witnesses.

The troops also blocked access to the main business centre of Srinagar with razor wire.

“This was necessitated after protests across Srinagar city last night soon after Imran Khan’s speech,” said a police official, who declined to be identified.

Muslim-majority Kashmir has long been a flashpoint between nuclear-armed India and Pakistan, which have fought two of their three wars over the divided territory. Both countries rule parts of Kashmir while claiming it in full.

India’s crackdown as it revoked occupied Kashmir’s special status was accompanied by severe restrictions on movement, as well as disconnection of telephone services, with mobile and internet connections suspended.

The protesters raised high-pitched pro-freedom and anti-India slogans. Indian troops and police personnel fired teargas shells and pellets on protesters at several places, injuring many of them.

The occupation authorities have imposed restrictions in Srinagar, Ganderbal, Islamabad, Awantipora, Sopore, Handwara and other areas. People were not even allowed to offer Jumma prayers at any of the major mosques or shrines in the Kashmir valley including Srinagar’s historic Jamia Masjid, Dargah Hazratbal, Dastgir Sahib and Charar-e-Sharif for the 8th successive week, since 5th August.

People had also staged an anti-India demonstration in Srinagar’s area of Batamaloo and took out a torch procession in Anchar. Anchar has become a no-go area for the Indian forces.

The villagers in Baramulla district torched a vehicle of Indian Border Security Force after it hit a civilian car and injured three persons including two women.

Meanwhile, a soldier of Indian Border Security Force (BSF) committed suicide by shooting himself with his service rifle during duty hours at the main gate of the office of Deputy Commissioner in Doda town. This incident of suicide raised the number of such deaths among Indian troops and police personnel to 441 since January 2007.

On the other hand, as per media reports, prolonged internet shutdown in the Kashmir valley has put the livelihood of at least 3,000 techies working in various valley-based IT companies on the chopping block. The reports said that post August 5, Kashmir valley had witnessed 46,000 job cuts in different sectors ranging from IT to tourism to retail. They added that hospitality sector is the worst hit with 40,000 employees laid-off after Indian government issued advisory asking tourists and Amarnath yatris to leave Kashmir on August 2.