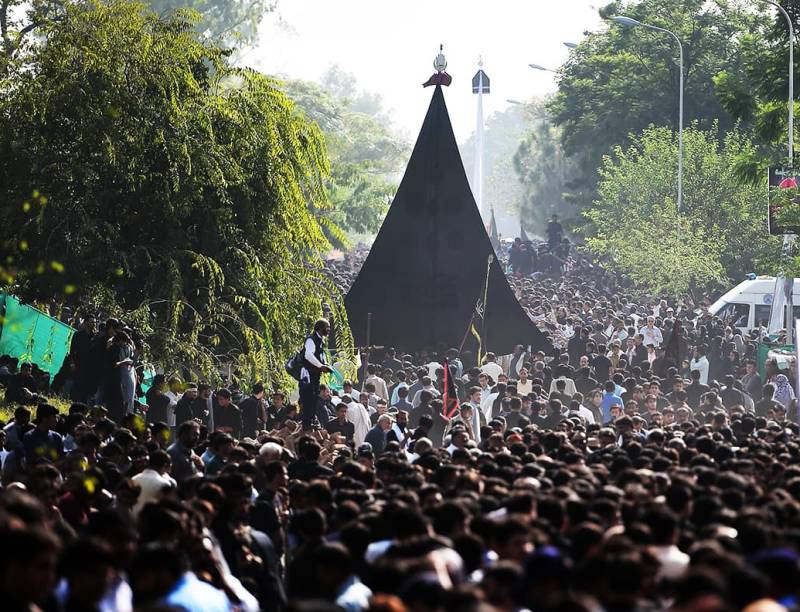 MIRPUR – The 10th of Muharram-ul-Haraam, Ashura, was observed on Sunday with due reverence and solemnity In Azad Jammu Kashmir (AJK) to commemorate the supreme sacrifices of lives, offered by Hazrat Imam Hussain (RA) and his companions for upholding the sanctity of Islam, righteousness and truth.

Observance of this day symbolises unique sacrifice of the grand son of the Holy Prophet Hazrat Muhammad (Peace Be Upon Him) Hazrat Imam Hussain (RA) and his companions who embraced martyrdom in the blazing deserts of Karbala.

Tazia, Alam and Zuljinnah processions were brought out from central Imambargahs in all major cities and towns across the State including in the capital city of Muzaffarabad besides Mirpur, Kotli, Bagh, Bhimber, Sudhanoti, Haveili, Rawalakot, Hattiyan and Neelam valley districts which culminated at their stipulated religious sites - Imambargahs after passing through their traditional routes, terminated at the main imambargahs this evening.

Religious scholars, including ulema, khateeb and zakireen called upon the Muslim Ummah on this occasion to foster unity in their ranks to fight against inimical forces of Islam.

No untoward incident was reported from any part of the AJK till filing of this report, following fool proof security and other arrangements.

Other processions were taken out from other different areas of the towns and villages merged into the main processions to terminate after reaching their destinations.

Thousands of mourners walked in the processions.

Water and milk stalls were set up to quench the thirst of the mourners, in stark contrast to the situation of Hazrat Imam Hussain (RA) and his companions who were denied even a drop of water by their heartless enemies.

Zakirs, Naatkhawans and religious scholars highlighted the significance of the supreme sacrifice of Hazrat Imam Hussain (RA) and his companions who laid down their lives for supremacy of righteousness, truth and justice.

All three stations of Azad Kashmir Radio Mirpur, Tararkheil and Muzaffarabad aired special programs in the backdrop of the historic significance.