Mob burns down shrine of Hindu saint in KP 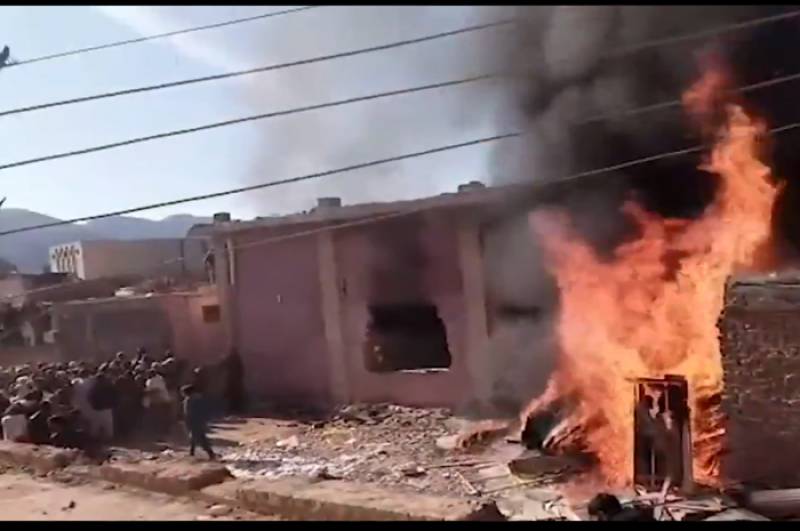 PESHAWAR – An angry mob vandalised the samadhi (shrine) of a Hindu saint and subsequently burnt it down in the Karak district of Khyber Pakhtunkhwa on Wednesday.

Police have confirmed the incident that happened in a far-flung area of Teri town. An under-construction house owned by a member of the Hindu community was also demolished.

The mob was dispersed by security officials after the violence.

Karak District Police Officer Irfanullah confirmed the attack on the shrine, which was built in 1920.

He revealed that local residents had announced to hold a peaceful protest but they were provoked by a cleric, causing the law and order situation.

The police officer said the shrine's keeper had "secretly" bought a house next to the shrine. The protesters were against its construction because they assumed the shrine was being expanded, Dawn reported.

DOP added that no Hindus lived in the area, adding the town was the home of the single samadhi

Policed have registered a first information report (FIR) of the incident but no arrest has been made.

KP Chief Minister Mahmood Khan took notice of the incident and directed police to take action against the persons involved in the incident.

Human Rights Minister Shireen Mazari in a tweet said: "Strongly condemn the burning of a Hindu temple by a mob in Karak, Khyber Pukhtunkhwa. KP government must ensure [the] culprits [are] brought to justice."

Strongly condemn the burning of a Hindu temple by a mob in Karak Khyber Pukhtunkhwa. KP govt must ensure culprits brought to justice. MOHR also moving on this. We as a govt have a responsibility to ensure safety & security of all our citizens & their places of worship.

"We as a government have a responsibility to ensure safety and security of all our citizens and their places of worship," she added.