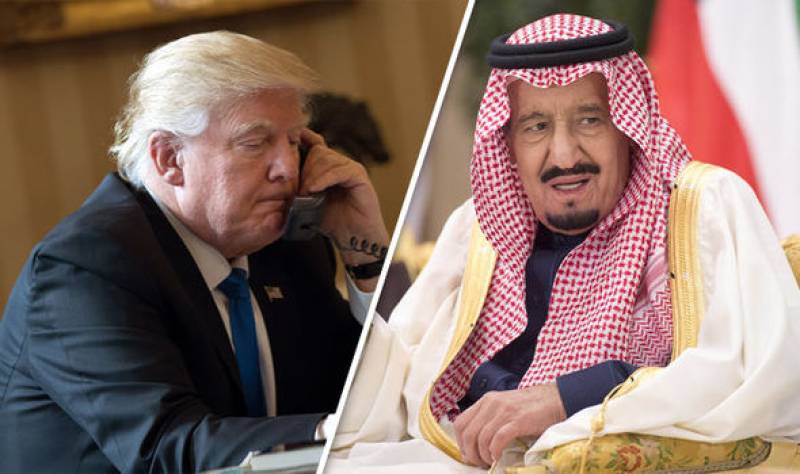 RIYADH - Not long after imposing a visa ban on seven Muslim countries, U.S. President Donald Trump made his first call to an Arab leader, Saudi Arabia's King Salman on Sunday, while both leaders agreed to establish safe zones in Syria and Yemen, besides combating terrorism through extensive coordination.

In a statement released by the White House, the Trump administration confirmed that the “two leaders reaffirmed the longstanding friendship and strategic partnership between the United States and Saudi Arabia.”

Both leaders also agreed to support other “ideas to help the many refugees who are displaced by the ongoing conflicts," the statement said.

On the other hand, the Saudi Press Agency made no mention of safe zones in its press release. It said the two leaders had asserted the "depth and durability of the strategic relationship" between the two countries.

The White House also confirmed that King Salman also invited Trump “to lead a Middle East effort to defeat terrorism and to help build a new future, economically and socially, for the people of the Kingdom of Saudi Arabia and the region.”

It is learnt that both leaders exchanged no words about the recent ban on seven Muslim countries and refugees.

According to the Arab News, Trump also made a phone call to Sheikh Mohammed bin Zayed Al-Nahyan, Crown Prince of Abu Dhabi and Deputy Supreme Commander of the UAE Armed Forces, on Sunday. The leaders explored ways of enhancing bilateral ties.

Sheikh Mohammed affirmed that extremism and terrorism have no religion or identity and the groups that preach false slogans and ideologies seek to disguise their criminal intention in spreading chaos and destruction.

The two sides took stock of the latest regional issues and developments in light of the UAE and US’ vision regarding important ideas and initiatives that aim to put an end to the security and humanitarian deterioration in the region.