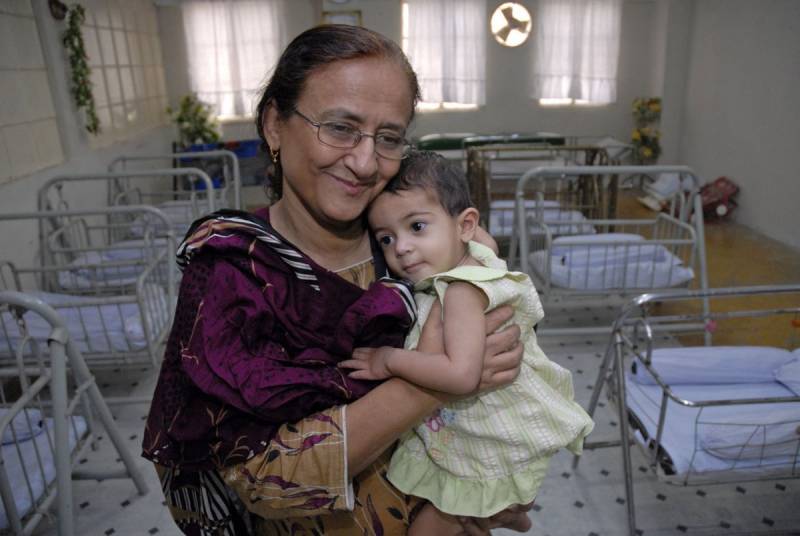 One of the world's most eminent humanitarians and philanthropists, Bilquis Edhi has been declared the ‘Person of Two Decades’, by a UK-based organisation, along with human rights rapporteur of the UN Prof Yanghee Lee, and the US ethicist Stephen Soldz.

A spokesperson for the Edhi Foundation told APP that as per the domino effect verdict, announced on Friday by the Impact Hallmarks, Bilquis Edhi was declared the 'most impactful person' of the first two decades of the 21st century.

The 73-year-old Bilquis Bano Edhi is a professional nurse who heads the Bilquis Edhi Foundation. She has spent more than six decades of her life serving humanity. Her charity has saved over 42,000 unwanted babies so far by placing jhoolas (cradles) at the Edhi Homes and centres across the country.

Widow of late Abdul Sattar Edhi, called 'the mother of Pakistan' lived a frugal life and served humanity regardless of any discrimination. She is the unparalleled noted humanitarian, a social worker and one of the avid philanthropists in Pakistan.

In the recognition of her philanthropic initiatives, she was already awarded with various national and foreign awards including the prestigious 'Hilal-e-Imtiaz', Mother Teresa Memorial International Award for Social Justice (2015), and the 'Ramon Magsaysay Award for Public Service' in 1986 along with her husband. Besides several other awards, she is also the recipient of the 'Lenin Peace Prize.'

Another honour the contest brought for the country was declaration of another Pakistani – an erudite, a polymath and a discoverer, Prof Aurangzeb Al Hafi – among “Top of the Top Ten” for his scientific discoveries.

From over 190 countries, over 1.6 million personalities with diverse backgrounds were nominated for the title. An online opinion poll for global audience was carried out to vote for their best-loved personality.

Graca Machel— an advocate of women and children rights (Mozambique)

The domino effect runners up include:

KARACHI – Bilquis Edhi, who is one of the world's most eminent humanitarians and philanthropists, has been ...