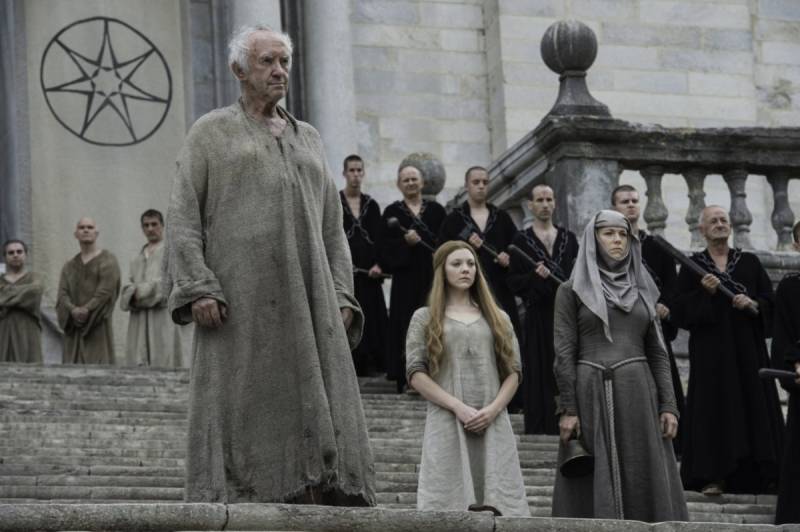 LAHORE (Ali Zain) - Locals of Kings Landing were all set to witness another walk of atonement in "Blood of My Blood", the latest Game of Thrones episode aired on Sunday night; however, the High Sparrow surprised them with the announcement "the will be no walk of atonement for Queen Margaery."

The development took place when Jaime Lannister led the royal military to the Septon to recover Queen Margaery from the High Sparrow's captivity. But, at the very moment, the High Sparrow announced that King Tommen and the Septon have joined hands against any threat to the kingdom.

This announcement, which obviously shows the High Sparrow as winner, left Cersie Lannister, Jaime Lannister and the armies of House Baratheon and House Tyrell quite helpless and unable to digest the humiliation.

Did you miss episode 5? Here is a quick recap for you

Moreover, following the attempt to storm the Septon, King Tommen has dismissed Jaime Lannister from the position of Lord Commander of King's Guard and deployed him in Riverrun instead.

On the other hand, Cersie Lannister will have to undergo another trial in her brother's absence. This time, she will be opting for a trial by combat, relying on Mountain to crush any opponent and prove her innocent.

All of this would not have been possible without High Sparrow's invitation to visit his wife in the custody of Septon, during which she revealed that the High Sparrow's teachings had enabled her to accept her true image. As a reaction, King Tommen forged an alliance with High Sparrow to protect the Septon and Kingdom simultaneously.

Other important developments From Episode 6:

Fans had mixed reaction towards this episode, unlike "Hold The Door", which enjoyed near universal acclaim.

So is the #GameofThrones crown and religious unification like when Savage and Hogan formed the Mega Powers?

BURN them all!!! Another great episode. Actually loved the Sam and Gilly bits in this one. :D#MadKingFlashBack#GameofThrones

Fun to see the High Sparrow turn a blind eye to the incestuous nature of the King's lineage when it helps his cause. #GameofThrones

Watching #GameofThrones tonight like "Where the fuck is Jon Snow?!"

The lack of Sansa, Jon, Davos and Pod (aka the dream team) was stomach churning #GameofThrones

Made a friend watch #GameofThrones today. And they aired the worst episode of the season yet. Grrrrrrr

Compliment eyebrows when you can. It just might save your life. #GameofThrones #Arya #SheisNotNoOne pic.twitter.com/6H3sWwLYJN

ITS THE BEST SHOW EVER #GameOfThrones

#GameofThrones was kind of all over the place tonight... But dang #Khaleesi... #fb pic.twitter.com/nhF3JMhFNK