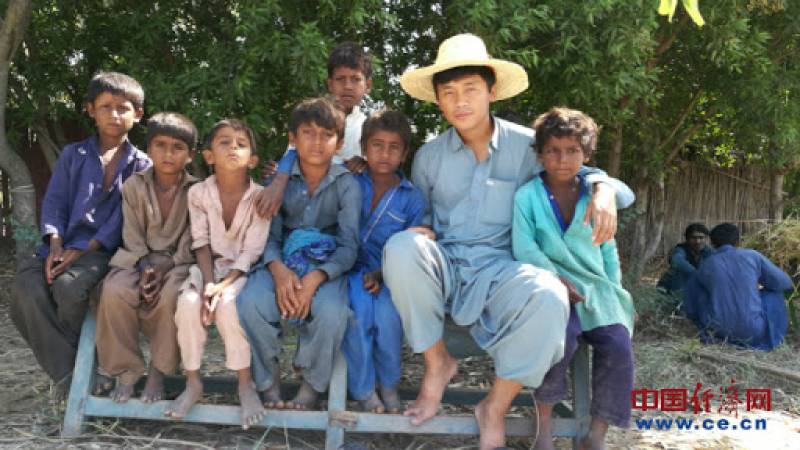 BEIJING - Agriculture in Pakistan still relies heavily on manpower, and my goal is to promote advanced agricultural technologies and hybrid rice in this country to improve rice production and alleviate the burden of farmers, says a young Chinese man who has been promoting the plantation of hybrid rice in Pakistan for three years.

Wearing a Pakistani costume of long robe matched with a farmer straw hat, Dai Yingnan strode barefoot through a patch of hybrid rice field, observing the status of the crop.

Born in a village of Liaoning Province in northeast China, the post-90s young man had personal experience of growing corn and rice with his parents when he was little, and therefore had a deep understanding of the hardship of farmers.

I chose to learn agronomy at Hunan Agriculture University at the advice of my teacher. Since few students would compete for this major that has a strong link with farming, it became a safer choice for me to go to this university, Dai Yingnan told China Economic Net, but I had regretted this choice for a long time because the thought that I would become a farmer after receiving 4-year education in college upset me.

The turning point appeared when Dai Yingnan, as representative of his university, had an opportunity to talk to Yuan Longping, “Father of Hybrid Rice”.

When I was confused about the prospect of agronomy, the esteemed man told me that agriculture that sustains the life of people is the foundation of a country. At the same time, it’s a slow-growing industry that requires the accumulation of time and people devoted to it. He encourages us to find truth in fields, Dai recalled.

After graduation in 2017, Dai got an offer from Yuan Longping High-tech Agriculture Company with Yuan Longping serving as Honorary Chairman and was later assigned to Pakistan to promote hybrid rice. “I never thought I would love this work until I was stranded at home for almost half a year due to the COVID-19 pandemic. I really miss the farmlands in Pakistan”. Dai said.

Carrying out research and promoting the plantation of hybrid rice in Pakistan is never an easy job. Dai had to select one type of seed that is most suitable for the local environment out of thousands of seeds, which demands years of experiments. One of the best ways to find the right seed is to plant hybrid rice in test fields. And it needs careful observation and detailed records on the growing process of the plants from sowing, blooming, to harvest. One missing or false record would lead to failure of the experiment that usually costs at least half a year.

Pakistan’s torrid weather is another bigger challenge for the young chap growing up in a cooler place in China. The temperature in Pakistan in summer can reach nearly 50„ partnered with fierce sunlight and strong dust. When walking in rice fields, anyone will be sweating and unkempt. After three years of touring between cities of Pakistan for the experiment, I get suntanned and look 10 years older than my peers, Dai quips.

Since April 2018, Dai began to make short videos to record his life and work in Pakistan and shared one or two per day on Chinese social media platforms. So far, he has posted more than 500 videos, attracting around 165,000 followers.

In his films, Pakistan is a dynamic land, where you can always find warm scenes like barefooted children following behind their father come around to Dai Yingnan with curiosity when they see a Chinese face; rice shoots stretching in a large area waive in the summer breeze; a Pakistani young man dancing in fields celebrating the increased production of hybrid rice; a big brother treated Dai with the best Chai when he harvests the high-yield hybrid rice.

Pakistani people are immensely hospitable. Dai highlighted. “Once a farmer invited me to have dinner at his home for thanking me to provide guidance on the plantation of hybrid rice and when I sat down at the table, I found a pair of chopsticks specially prepared for me. I was very touched by their thoughtfulness at that moment, because I knew they had to buy the chopsticks for me from a town away from here.

In October, the harvest month every year, the yield of hybrid rice is apparently higher than the locally grown rice, and even twice in some places by comparison.

“I used to invite local farmers to share the joy of harvest when we reap the hybrid rice because I have a feeling of accomplishment when I see smiles on their faces,” Dai said with a beam of happiness.