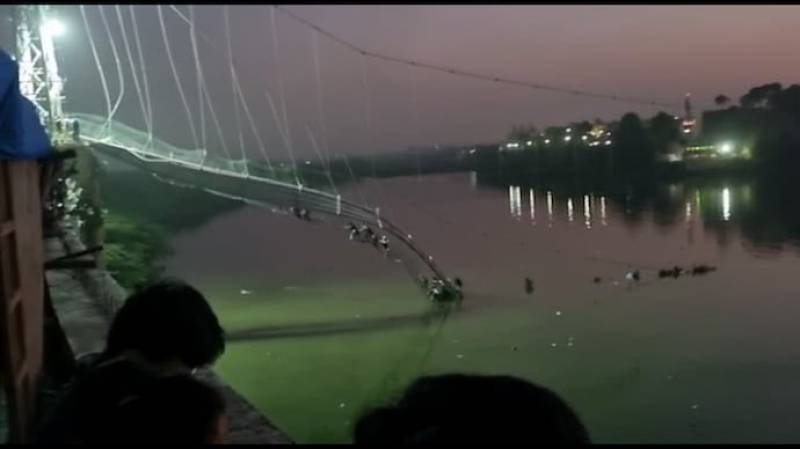 NEW DELHI – At least 141 people died as a century-old suspension bridge collapsed in a major tourist attraction in the western Indian state of Gujarat on Sunday.

Reports in Indian media quoting the state disaster management agency said nearly 200 people were on the 750-foot-long bridge when it collapsed into the river below on Sunday evening in Morbi, a city in Gujarat.

Officials claim that a cable was snapped at one end of the bridge, sending scores of people into the Machchhu River, the home state of Indian PM Narendra Modi.

Women, children, and elderly persons were among the deceased who are celebrating the Diwali festival. The bridge built during British rule in the 19th century in Morbi had been reopened lately after maintenance.

Suspension Bridge in BJP’s Gujarat collapsed. More than 400 people fell into water and got injured!

To be noted that, this bridge was renovated & opened just 5 days ago.

This is Gujarat’s development 👇 pic.twitter.com/8IQi9LHwZR

The shocking clips showed scores of victims holding the cables, some holding on to the dilapidated structure to reach banks, while rescue teams rushed.

Besides the local help, Indian armed forces are also taking part in search and rescue operations.

As the causalities shock the South Asian nation, the provincial administration has filed a criminal complaint against the agency that got a maintenance contract and an investigation committee has been formed to probe the incident.

Several century-old infrastructures were long been dubbed dangerous due to safety concerns while such mass-casualty episodes also occurred due to corrupt practices.