BIBURY - Scores of yellow cars flooded a picturesque Cotswold village in United Kingdom in an act of solidarity towards Vauxhall Corsa owner Peter Maddox on Saturday.

According to the surprising details, 84-years-old pensioner Maddox faced much worry after his Yellow 'Corsa' was vandalised in February.

Mr Maddox came under fire for parking his car outside his cottage in Arlington Row.

The widower had already been slammed by locals, who said his vehicle was an 'eyesore' on the rural idyll of Bilbury, Gloucestershire.

Not only the pensioner was humiliated for having a yellow car but a group of vandals also scrawled 'move' on the bonnet and smashed in his windows causing £6,000 worth of damage.

After hearing about his plight hundreds of sympathisers in yellow cars descended on the village for a rally in support of Mr Maddox.

Mr Maddox, who watched the convoy as it drove past his cottage, said he was 'overwhelmed' by the show of support for his yellow car.

Organiser Matty Bee, from Coventry, said: 'The response has been amazing and overwhelming; people from all over the country and all over the world have applied to join the group'. 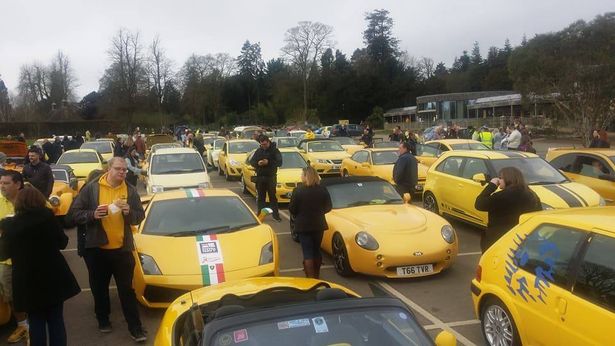 'We've had everything here from a three-wheeler and a Mini to a Lamborghini super car...I've never seen so many yellow coloured cars in one place' he added.