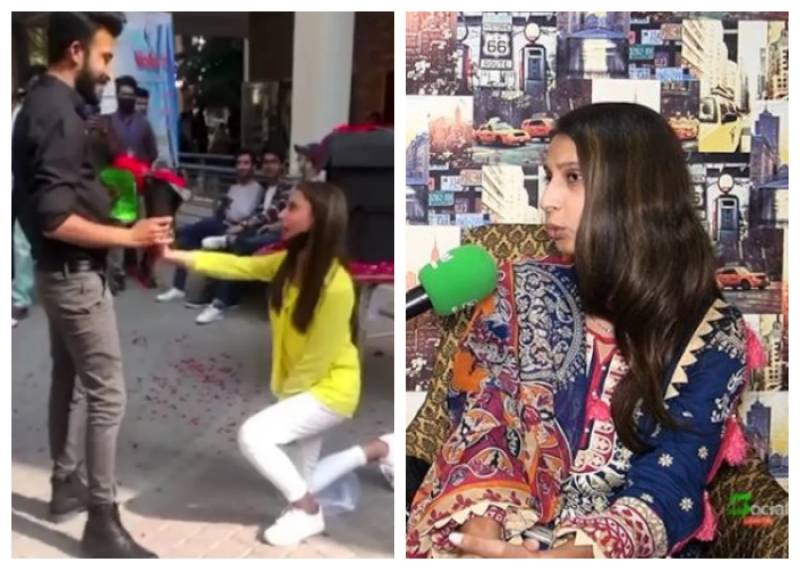 The whirlwind romance of the famous or rather infamous University of Lahore (UOL) couple seems to have failed as the girl Hadiqa made some explosive revelations in her recent interview.

Earlier, the viral video of the shocking proposal created a ruckus on the internet as the couple had been thrust into the spotlight amid the entire fiasco being blown out of proportion.

After the video spread like wildfire, the rumours were abuzz that the couple have tied the knot after which they were allowed to attend the university again given they were expelled earlier.

Now, Hadiqa Javed has stepped forward and made some shocking revelations regarding the aftermath of the viral video.

Admitting that the public proposal had been her biggest mistake, Hadiqa went on to say that she regrets proposing Shehryar publicly and deemed her action 'inappropriate'.

“My only mistake was that I expressed my love in front of everyone and later I realized that it was my biggest mistake. Now I regret why I proposed to Shehryar at that moment. I still mean to what I said but that act of proposing him wasn’t appropriate at all.”

Hadiqa rebuffed marriage rumours and said that all the pictures and the wedding news were fake.

Further, she maintained that while proposing they both planned on wearing a mask but due to excitement they both forgot which is why they were recognisable in the viral video.

"University staff called our families for a meeting but after the video went viral we were not in a position to face someone so the university decided to expel us”, added Hadiqa.

Delving into details about the outcome, Hadiqa opened up about how the two families met and the things that followed shocked her to the core.

“When our parents met, Shehryar’s family said something that was beyond my imagination. According to them, Shehryar is still young and he is not old enough to get married yet. They also added that Shehryar is engaged since his childhood."

She revealed that her family tried to make her understand that living in such circumstances will be hard but her father comforted her that they would support her decisions.

Further, Hadiqa revealed that the couple is no more in contact and the girl with whom Shehryar makes TikTok videos is someone else. While talking about resuming his studies, Hadiqa said her studies have been affected and she will continue from September.

“We haven’t contacted each other for a long time, so marriage is not possible.”, she concluded.

With the traditional way of proposing abruptly evolving in Pakistan under the influence of foreign cultures, young ...