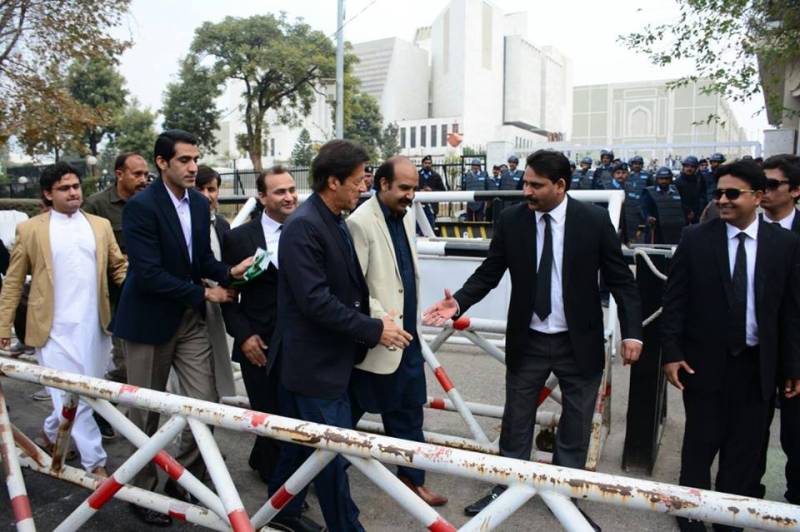 The Supreme Court of Pakistan raised three questions during hearing of the Panama Leaks case on Tuesday.

The three questions asked by Justice Asif Saeed Khosa are listed below:

Supreme Court of Pakistan expressed suspicion on the statements of Prime Minister Nawaz Sharif and his children submitted in Panama Leaks case, and said there seems contradiction in the stances of Hassan Nawaz and Qatari prince.

The court said if all the statements are read thoroughly, it seems that the money trailed from Dubai to Qatar, then to Saudi Arab and London.

A five-member larger bench of the Supreme Court of Pakistan, headed by Chief Justice Anwar Zaheer Jamali resumed hearing of Panama Leaks case and a probable show down between govt and PTI is expected.

A request for hearing on daily basis has been forwarded by Prime Minister's scions taking the plea that the case was of crucial importance.

During today's hearing, Chief Justice Anwar Zaheer Jamali said that FBR,NAB ad FIA did not play their part and if state institutions fail to play their due role, they should rather be shut down. He asked Naeem Bukhari that he could argue in court today for thirty five minutes only.

Expressing his views over an application filed by Jamaat-e-Islami for formation of judicial commission, he said that the apex court could explore any option.

Justice Ameer Hani Muslim observed that the apex court did not bar any institution from performing its duties.

He claimed that there was a flagrant contradiction between statements of PM Nawaz and his son Hussain Nawaz as the latter claimed buying London flats after investment settlement in Qatar.

Justice Aijaz Ul Ahsan inquired as where the premier had declared Maryam as dependent children in wealth tax statements of 2011 to which Naeem replied that he had got documentary evidence for that.

Naeem went on and said that PM Nawaz received gifts worth Rs. 740 million in 2014-15 from his son Hussain Nawaz but did not pay due tax on those. He alleged Prime Minister of evading tax.

He claimed that Maryam Nawaz was a share holder of Chaudhery Sugar Mills and her assets sweleed in 2011-12. Naeem said that Maryam admitted that she lived in Jati Umrah along with her father and that she was not an owner of any property whatsoever. He claimed that there was no legal standings of trust deed presented by Sharif family and so Maryam Nawaz was owner of the said companies.

“I have evidence to prove that Maryam Nawaz is dependent on the Prime Minister,” Bukhari said.

Where has the Prime Minister written in his tax files that Maryam Nawaz is his dependent? The Supreme Court remarked in the case.

Naeem Bukhari said that in his first speech the Prime Minister never gave a date on which his mills based in Saudi Arabia were sold.

“How were the London flats bought?” Bukhari asked, “Were they bought after selling the Dubai mill or the Jeddah mill?”

Detailing about Hudaibia paper mills, he expressed that Maryam Safdar,Shehbaz Sharif and Hussain Nawaz were among its directors.

Justice Jamali remarked it could be possible that Mian Shareef was handling business affairs of family.

Justice Azmat said that the issue of dependence was of pivotal nature. He said that we should analyze as how legal frameworks interprets dependence of someone.

Justice Azmat and Naeem also engaged in a banter when the former inquired Naeem about his age. Naeem replied that he was 68-years old. Justize Azmat replied that he should better go home and pray to Allah.Naeem also replied that the court should not make fun of him.

He went on and expressed that Hassan Nawaz in an interview in 1999 confirmed that he was living in a rented apartment for which the money was sent from Pakistan.

Justice Asif Saeed Khosa replied the court had noted the money was sent from Pakistan as the family was doing business there.

Naeem argued that Hassan Nawaz was  a student in 1999 and so from where did he get the money to setup flagship investment company in 2001.

Naeem Bukhari formally completed his arguments and now the apex court would listen to Akram Sheikh, the representative of PM's scions to fend off the allegations levelled at the family.

During today's hearing, a senior lawyer protested that there was no chair for him to sit and attend the hearing but to his dismay CJ said that the court could not arrange as many as five thousand chairs for proceedings and so the proceedings could continue without him as well.

Talking to media outside Supreme Court PTI supremo Imran Khan said that the Panama case should not linger on for a longer period of time. Taking at potshot at Sharif family he said he is going to listen to bunch of lies.

During the last hearing, Naeem Bukhari had said that Dubai Steel Mill was going in loss, then how did Sharif family buy London apartments?

PTI’s counsel claimed that when Dubai factory was setup, Tariq Shafi was young and he was not given any money after the sale of Gulf steel mills. He asked the apex court to disqualify Prime Minister Nawaz Sharif on the basis of conflicts in his statements.

He went on to claim that Flagship investment company belonged to Hassan Nawaz. Moreover, a flat was recently bought by Sharif family in Hyde Park London but it was not mentioned in documents.

He also alleged Shehbaz Sharif of doing a fake signature by impersonating as Tariq Shafi,eho happens tobe a relative of Sharif family.

He added that London flats were purchased by Sharif family before selling Jeddah steel mills contrary to the claims of Sharif family.

On the other hand, counsel of Hussain Nawaz, Akram Sheikh presented documents regarding the apartments, which would be checked by court today.

Multiple political parties, including the Pakistan Tehreek-e-Insaf, Jamaat-e-Islami, Awami Muslim League and Jamhoori Watan Party, and an individual Tariq Asad had moved the apex court against PM Nawaz Sharif and his family over various charges, including money-laundering, setting up of offshore companies illegally and non-declaration of their assets, etc.