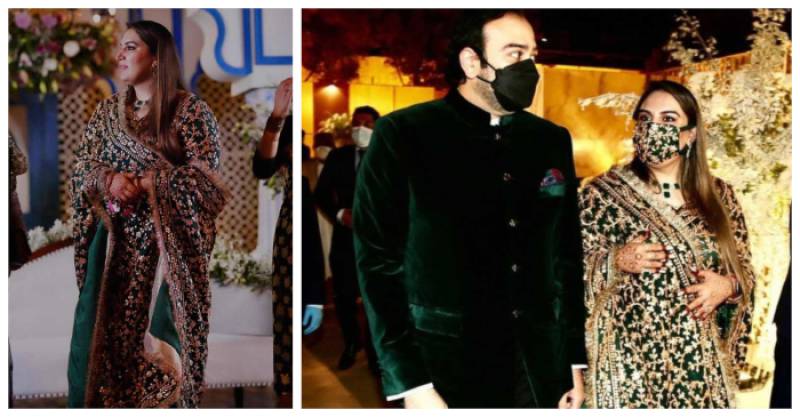 Weddings in Pakistan are a grand affair for the bride and groom. Naturally, outfits for these festivities have to be up to the mark as they require painstaking attention to details, even if most of them typically opt for crimson dresses with gold or silver embellishments.

Bakhtawar Bhutto Zardari tied the knot recently, leaving everyone in awe of her timeless choices. Her Walima outfit was a sight to behold, despite being a rather peculiar bridal galore, where the bride dressed up in a sapphire and gold traditional dress.

An unexpected turn for a reception ensemble,  the stunner looked royal in her deep emerald green raw silk kurta-shalwar covered in traditional gota work. Spotted alongside her was the groom, Mahmood Choudhry, who was dressed to the nines in his green velvet attire.

A classy apparel for Walima, but the outfit shockingly took more than 800 hours to complete.

Bakhtawar’s outfit was by a budding designer from Lahore named Haris Ahmed. Sharing details about his creation, Harris took to his Instagram handle, delving into details about Bakhtawar's outfit.

"We are privileged to design this traditional shalwar kameez for Bakhtawar Bhutto-Zardari, daughter of former President Mr Asif Ali Zardari and late Benazir Bhutto, on her reception day at Bilawal House," wrote the couturier.

Ahmed concluded, "Our team has worked over 800 development hours to bring this precious masterpiece, defined by the finest quality of hand-woven couture produced by zardozi (the art of gold sewing) layered with the sucha gota (real gota). Intricate twist of glistening threads accentuates the design and reflects creativity that reinvents the traditional aesthetic."

The couple exchanged rings two months ago on November 27, 2020, in an intimate ceremony held at the Bilawal House, where a limited number of people were invited.

The wedding celebrations started on January 24, 2021 at Bilawal House with a Mehfil-e-Milad and an intimate Mehndi ceremony. The Nikkah was held on January 29 followed by a Baraat ceremony on January 30.