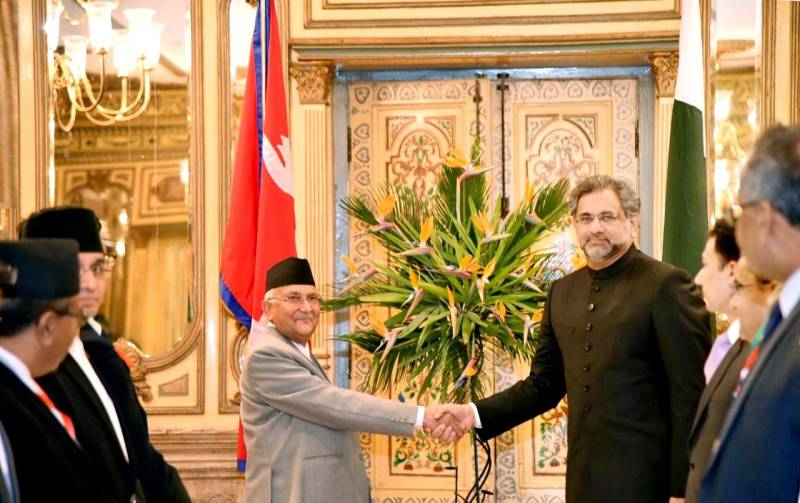 According to a communique issued by the PM Office, the official visit not only provided an opportunity for the leadership of two countries to discuss bilateral matters but to also share views on issues of global and regional importance including CPEC and SAARC.

In a meeting between Prime Minister Abbasi and his Nepalese counterpart Khadga Prasad Sharma Oli, particular focus was laid on China Pakistan Economic Corridor (CPEC) and China’s One Belt-One Road (OBOR) project, which was joined by Nepal in 2016.

Abbasi mentioned that the multi-billion dollars CPEC was the visible and significant part of OBOR and had resulted in materializing of several development projects in the country including motorways, Gwadar airport, economic free zones, and energy generation projects.

"CPEC would ensure connectivity of regional countries with China and all Central Asian states and Pakistan was ready to share experience and knowledge with Nepal on the matters related to CPEC," said the premier.

Regarding Turkmenistan-Afghanistan-Pakistan-India gas pipeline, Abbasi said the project was not confined to the gas supply only but was a flagship venture which included, railways lines and laying of fiber optic.

The visit also highlighted the importance of the continuity of democracy and premier Abbasi emphasized increasing people-to-people contacts and parliamentary exchanges between Pakistan and Nepal.

"Parliament was an ideal and appropriate forum as the democracy had been strengthened in Pakistan and was gaining roots in Nepal as well," observed the premier and added that the incumbent parliament in Pakistan was the second one in the country’s history which was going to complete its five-year term.

Apart from regional connectivity, both the leaders shared similarity of views on eradication of terrorism. Abbasi said Pakistan was not only a partner with countries fighting terrorism but a leader in waging war against this menace.

Shahid Khaqan Abbasi mentioned that Pakistan had successfully smashed out terrorism where other countries failed to do so, referring to Afghanistan. He stressed enhancing trade and cooperation on tourism between the two countries and the need to energize Pakistan-Nepal Business Council. The prime minister also invited the Nepalese investors to invest in Pakistan’s diverse sectors.

On South Asian Association for Regional Cooperation (SAARC), the two prime ministers discussed ways to reinvigorate the forum for the benefit of all member states.

"The potential of SAARC was not being exploited up to the mark and hence there was a need to hold the next summit on a priority basis," asserted the premier.

Moreover, Abbasi emphasized that through dialogue, the countries in the region could achieve the fruits of progress, development and prosperity.

Prime Minister Oli said Nepal had a fruitful relationship with Pakistan and expressed gratitude for providing assistance to the victims of Nepal’s massive 2015 earthquake. He appreciated Pakistan’s initiative of providing scholarships to 25 Nepalese students and requested to increase the number.

The leaders also discussed the long-standing Kashmir issue and the ongoing human rights violations in Indian occupied Jammu and Kashmir.